The Flu: What You Need to Know

What is the flu (influenza)?

The flu is an infectious respiratory illness caused by the influenza virus that infects the lungs, throat, and nose. The virus is contagious and can spread quickly between members of a population.

Symptoms of the flu can range from mild to severe, depending on the form of the virus, and the health and age of the infected person. While a majority of flu sufferers make a full recovery from the virus, it can occasionally result in significant impairment, or death.

The influenza virus emerges in yearly outbreaks around the world, and evolves from season-to-season, which affects the severity of the symptoms, and renders previously-useful vaccines ineffective in protecting against new forms of the virus.

How many types of flu are there, and which types affect humans?

Medical professionals classify four types of influenza virus: Type A, Type B, Type C, and Type D. Of these, Types A, B, and C have been shown to infect humans, while Type D is a more rare form of the virus that has only been known to infect cows and pigs.

When is flu season?

Flu season usually begins at the onset of fall and lasts through the following spring. Infections typically increase during the month of October, with the peak of flu activity occurring some time in the winter months between December and February. 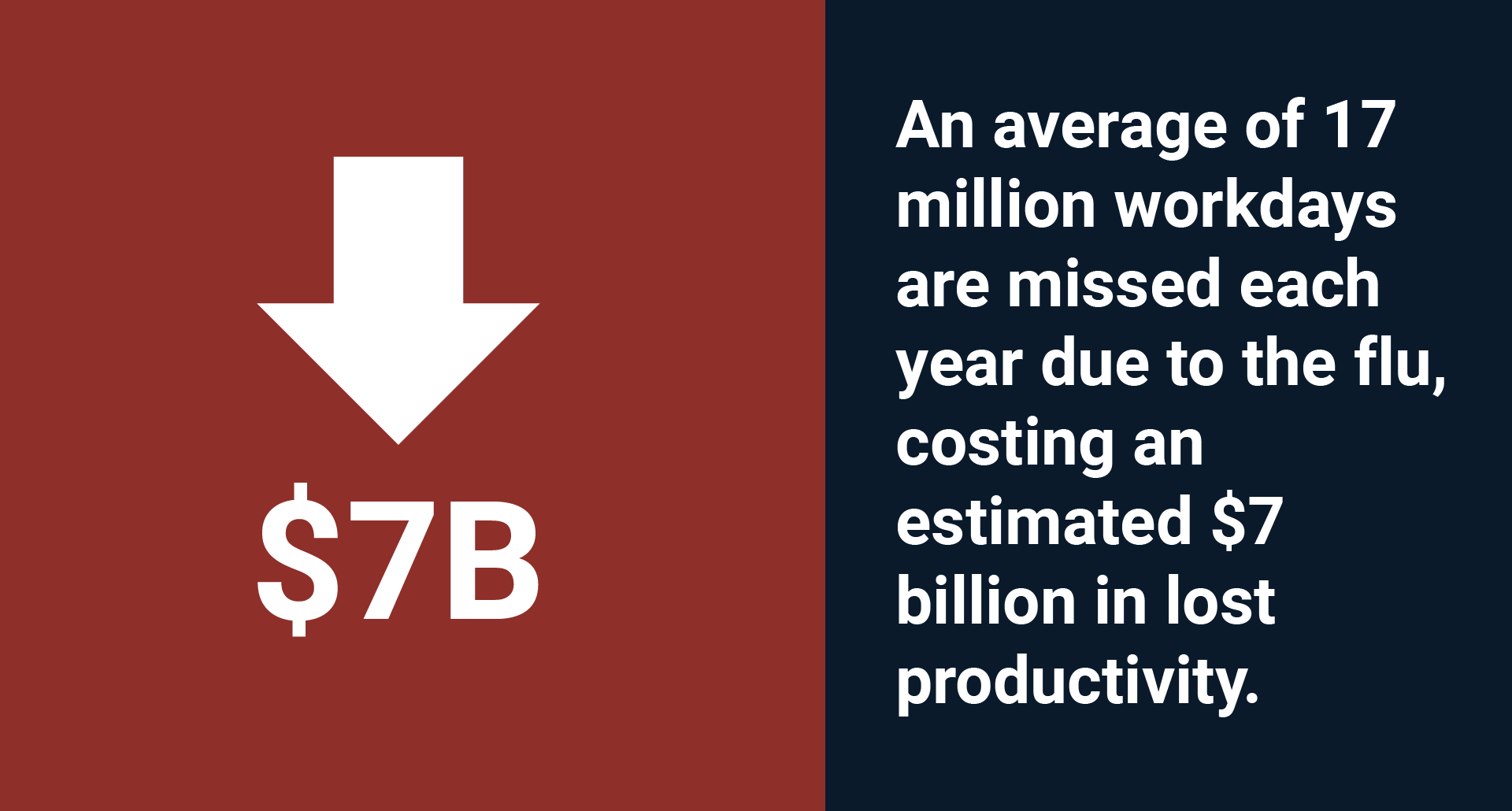 Symptoms of the flu

The first symptoms of the flu are often similar to the common cold and include sneezing, a runny nose, and sore, itchy throat. However, unlike the cold, flu symptoms worsen quickly and include some or all of the following:

Flu sufferers experience different symptoms, and although a fever is one of the most common flu symptoms, not everyone with the flu will have one. Children are more likely to experience gastrointestinal symptoms such as vomiting or diarrhea compared to adults.

How long does it take for symptoms to appear?

Flu symptoms appear relatively quickly after a person is exposed to the virus, typically 1-4 days after initial contact. Most commonly, people start to feel symptoms 2 days after contact.

How long is the flu contagious?

Those with the flu are contagious and may give the virus to others starting 1 day before symptoms appear, and 5 to 7 days after becoming ill. The peak contagious period is 3-4 days after the illness starts.

How does the flu spread?

The flu spreads from person to person, or through contact with surfaces or objects contaminated with the virus.

Experts believe that flu is usually spread from person to person through fluid droplets that are passed when an infected person is speaking, coughing, or sneezing. The droplets make their way into the lungs of others, where the infection manifests.

People can also contract through the flu through contact with contaminated surfaces or objects. The virus has been shown to remain active on surfaces for up to 24 hours.

Who is at the greatest risk of contracting the flu?

Nearly everyone is susceptible to the flu, but certain population groups are at greater risk of contracting the virus, and of developing life-threatening complications as a result of it, including: 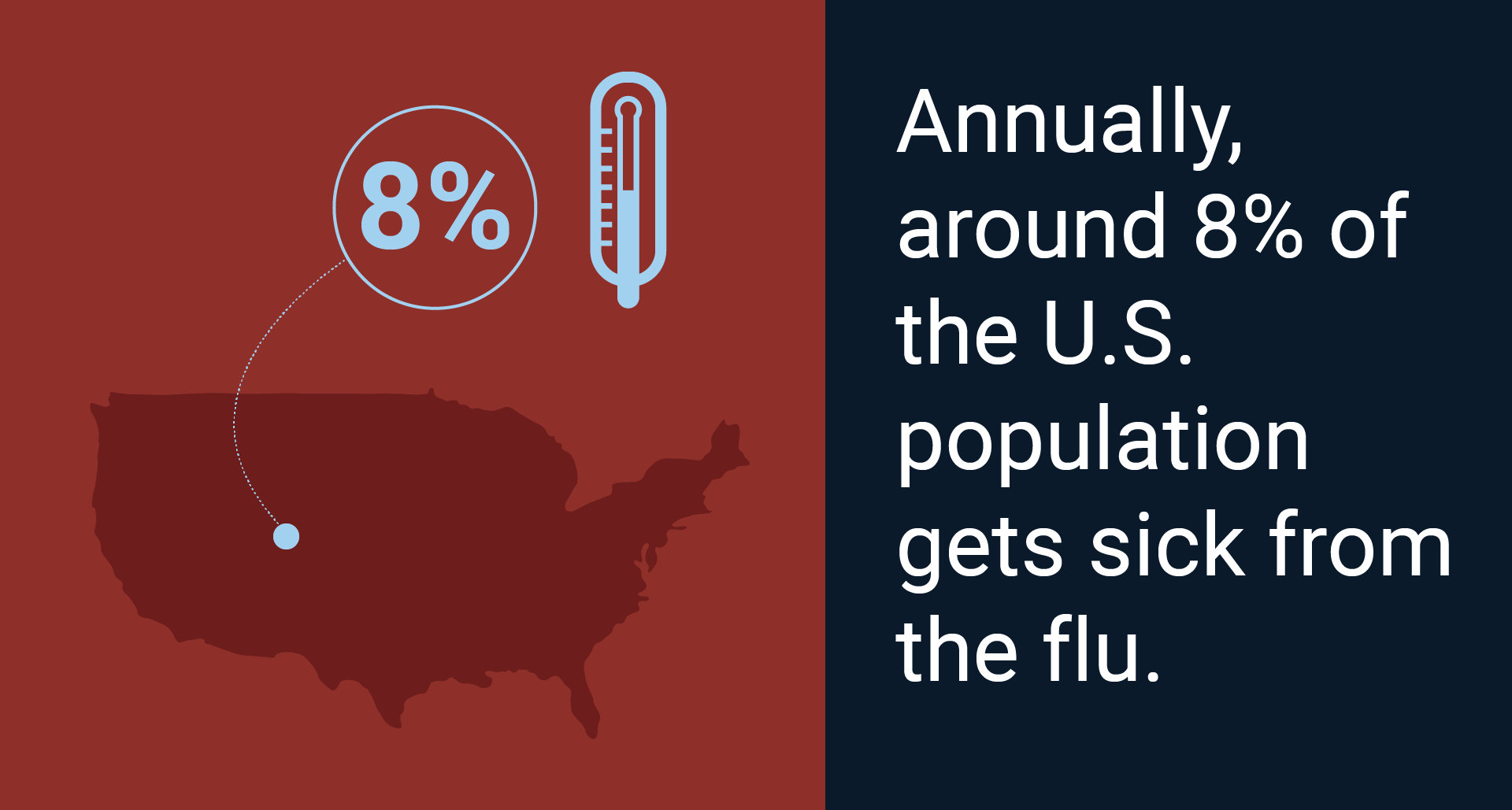 When should I see a doctor?

Most people that get the flu can get better through rest and self-treatment without having to see a doctor.

However, there are some cases when seeing a doctor is recommended, including if you belong to one of the above mentioned high-risk groups, or if symptoms worsen after several days.

Those that experience trouble breathing, delirium, severe neck stiffness, severe vomiting or stomach pains, or a fever at or above 103 F should visit the emergency room for inspection and treatment. 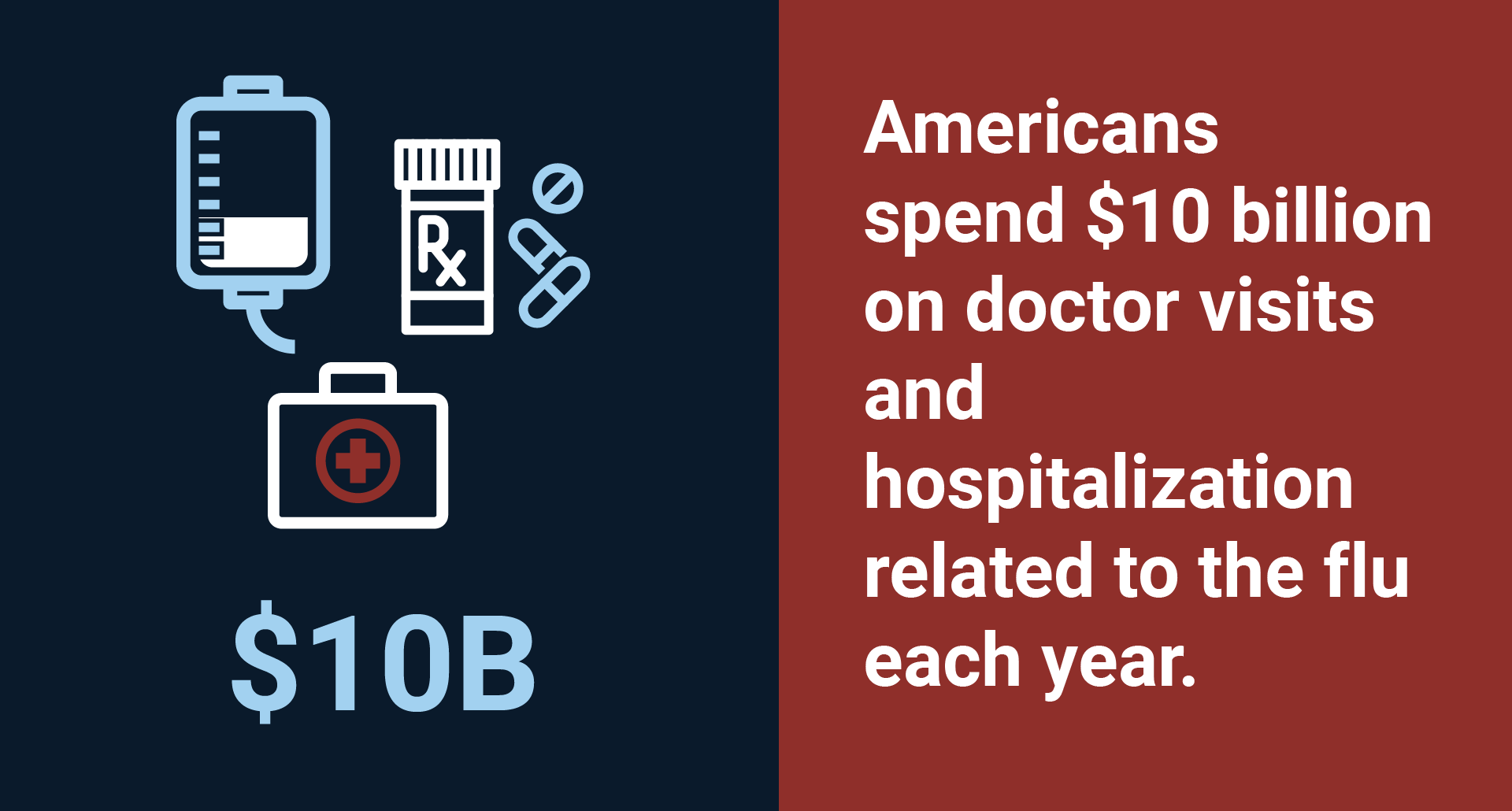 How do doctors diagnose the flu?

Doctors and medical professionals use a number of tests to detect whether a person has the flu, with the most common being known as the “rapid influenza diagnostic test (RIDT)”. RIDTs work through identifying virus antigens that provoke an immune response. They are not the most accurate flu test, but they provide the quickest results, between 15-30 minutes.

People who suspect they have the flu can get tested at a doctor’s office, or at a major pharmacy such as CVS or Walgreens, without an appointment. Currently, take-home flu tests are being developed and are expected to hit the market in coming years.

The best way to prevent catching the flu is getting a yearly flu vaccination in early fall, at the beginning of flu season. Walk-in flu shots are available at many major pharmacies, including CVS, and are often free with health insurance. For those that don’t have insurance, flu shots cost around $40 for people between the ages of 2 and 64, and about $70 for people 65 and older.

Another way to minimize the likelihood of contracting the flu is to practice good hygiene, such as avoiding close contact with people at work and in public environments, and regularly washing your hands using antibacterial soap. And one last way is to stay up-to-date on the latest influenza news, which we recommend as a secondary/tertiary measure.

The most commonly recommended forms of treatment for the flu include bed rest and drinking a lot of fluids. Additionally, over-the-counter medicines such as Theraflu can help to minimize symptoms.

However, those with severe symptoms or those that belong to an at-risk group may be prescribed antiviral flu medications, such as Tamiflu (oseltamivir phosphate) or Relenza (zanamivir). These drugs can lessen fever and associated symptoms, and shorten the duration of the illness. They are not available over-the-counter.

What are some major misconceptions that people have about the flu?

BELIEF: Antibiotics can help reduce a high fever resulting from a flu.

FACT: Antibiotics are effective in combating bacterial infections, but won’t help against the flu, which is a viral infection. However, in rare cases a bacterial infection can develop in the lungs as a result of a weakened immune system resulting from a flu infection, in which case antibiotics may be prescribed.

BELIEF: I can contract the flu from getting a flu shot.

FACT: A flu vaccination is made from influenza virus that has already been killed, so getting the flu from a flu shot is impossible. The reason people have this belief is that a flu vaccination takes 1-2 weeks to help people develop an immunity, so if someone has already contracted the virus, or contracts it shortly after getting a flu shot, they may get the virus, anyway.

BELIEF: You can’t give others the flu if you don’t feel symptoms.

FACT: People with the flu are contagious at least a day before they feel symptoms, and around 20% to 30% of carriers of the virus do not have symptoms.

BELIEF: Going out underdressed in cold weather, or having wet hair for a long period increases one’s chances of contracting the flu.

FACT: Flu is contracted through exposure to the influenza virus, and has nothing to do with exposure to cold temperatures. The fact that flu season occurs during the colder months of the year is the reason behind this commonly-held myth.

BELIEF: It is too late to get vaccinated after Thanksgiving.

FACT: Flu activity actually peaks in December or later, so as long as it’s still flu season, getting vaccinated is still a recommended and effective means of preventing the flu.

Can the flu be cured?

There is no cure for the flu, although some antiviral drugs are effective at lessening the symptoms and shortening the duration of the illness.

The fact that the influenza virus evolves quickly over time, and is active everywhere, makes it difficult for medical professionals to isolate and eradicate, as was done with the smallpox virus. 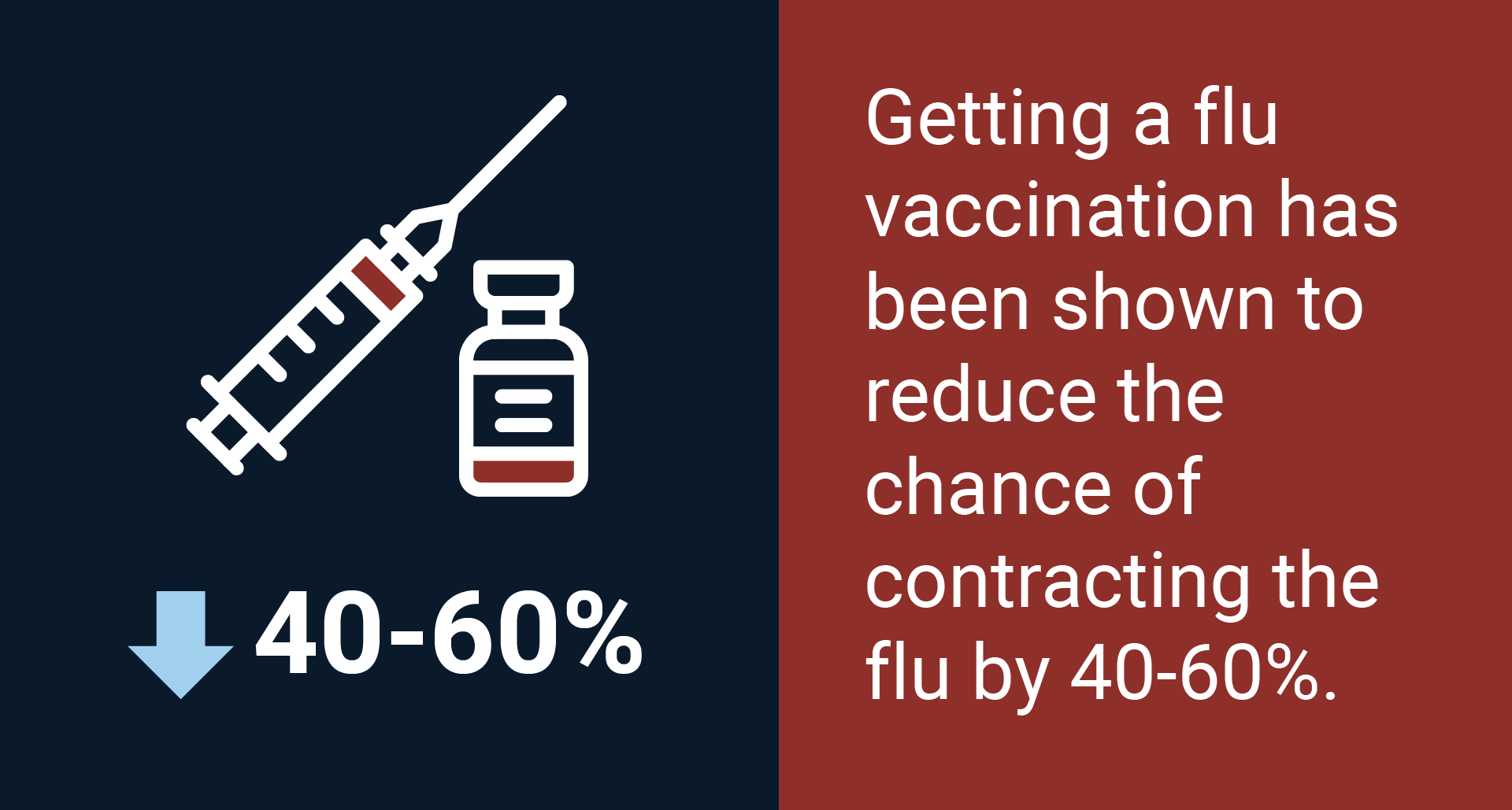 Does the flu jump from animals to humans?

In addition to humans, forms of the influenza virus commonly infect many animal species, including chickens, ducks, pigs, cows, horses, and whales. However, cross-species transmission of influenza is very rare.

According to the CDC, Avian influenza A viruses (aka “bird” flu) can be passed from animals to humans in two main ways:

What was the worst flu outbreak in history?

The 1918 Spanish flu pandemic was the worst in recorded history, resulting in the deaths of an estimated 50-100 million people around the world. Some believe it to be the greatest pandemic in history, although the Black Death of the Middle Ages killed a higher proportion of the world’s population.

The 1918 flu was remarkable for its high infection rate of nearly 50%, and the fact that a majority of its victims were young, healthy adults, rather than the very young and very old who are the usual at-risk groups for suffering serious consequences of flu illness. Rapid movement of large groups of soldiers and refugees after the end of the First World War was largely responsible for the virus’s quick spread. 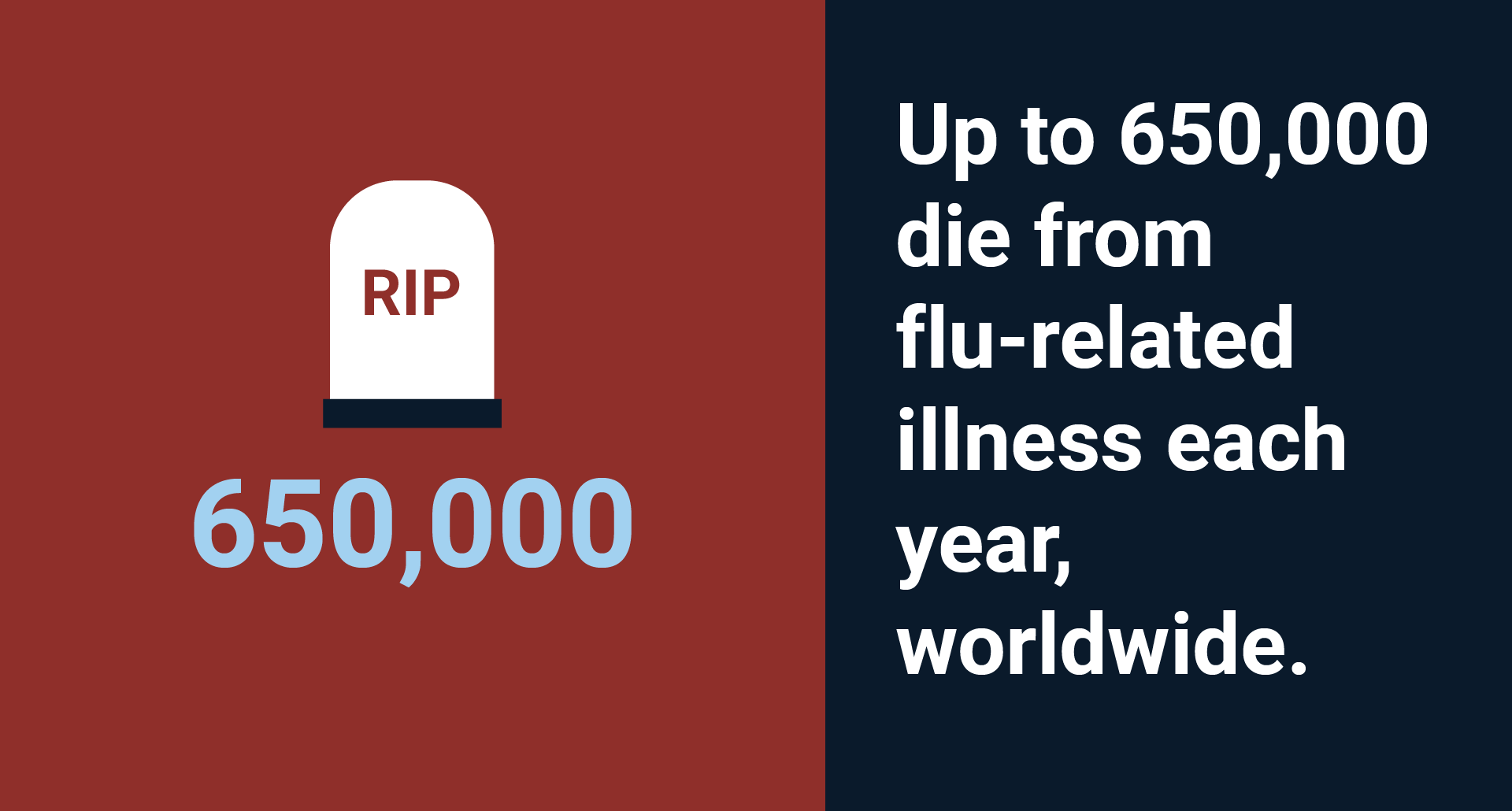