During the holidays, people are busy shopping, attending events, and preparing for big meals, but criminals are busy too. The holiday season is an opportune time to strike. With people carrying more cash and homes filled with expensive gifts, the holiday season creates a perfect environment for crime.

In an effort to inform homeowners about their security during the holiday season, Alarms.org conducted a deep-dive of crime statistics across the U.S. and computed a holiday crime score each state.

Let’s look at which states have the highest crime score and which have the lowest.

Florida’s crime score is more than twice the national average

What’s going on in Florida? Why does this southern state have such a high crime score? A few contributing factors include Florida’s high number of holiday arrests, a high percentage of gun ownership, and a fairly high poverty rate, just to name a few. As a result, Florida ranks No. 1 in holiday crime.

Wondering where your state ranks? Holiday crime scores vary across the U.S., but here’s a look at the rankings by state. States with lower holiday crime scores are in light red. As holiday scores increase, the shade of red intensifies. 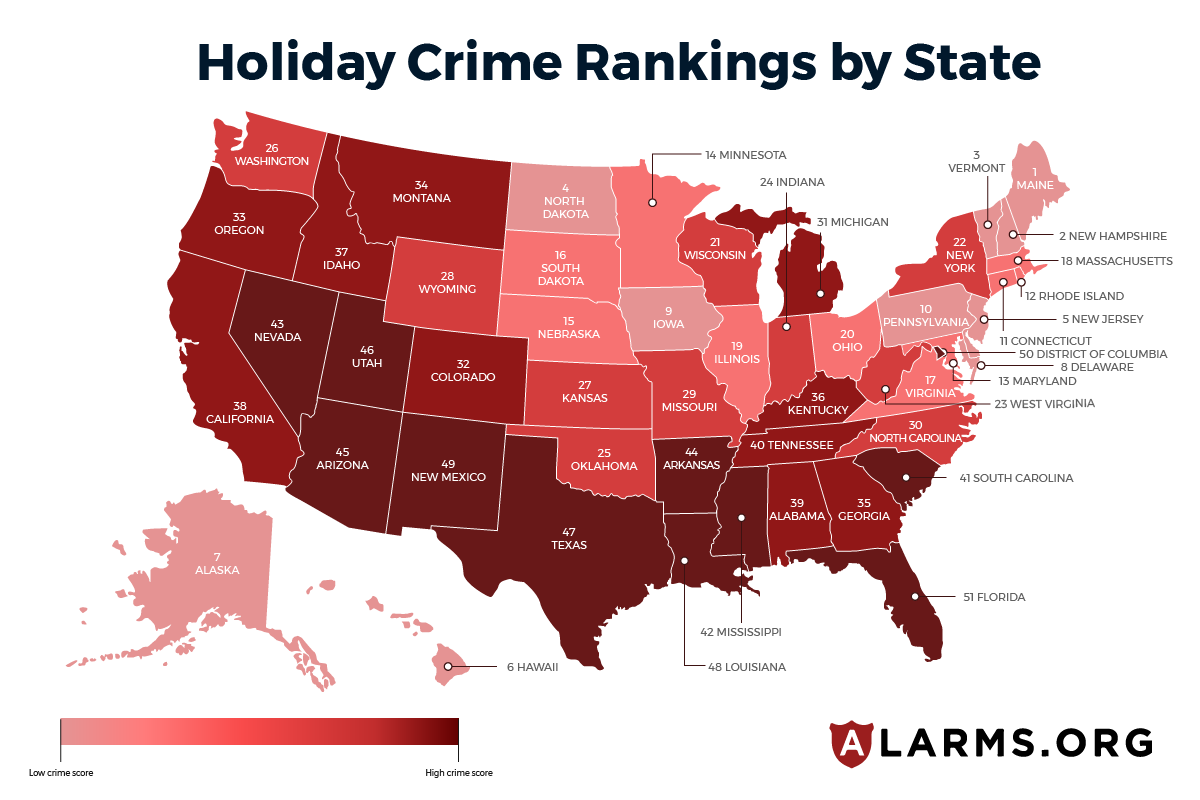 The southern states have the highest holiday crime score at 37.6, which is higher than the national average of 32.9.

Massachusetts, New York, Michigan, Florida, and New Mexico have the highest crime scores in each region.

Holiday crime rates shouldn’t be overlooked. No matter how your state ranks, it’s important to take extra safety precautions during the holidays. To help, here are some tips to follow to make sure the season isn’t spoiled by crime:

Install or activate an alarm system

Research shows 83% of burglars will look for a new home to target if there’s a security system in place, according to Angie’s List.

A simple home security system with door and window sensors, an interior camera, and some outdoor lighting is a great starter package. Today’s alarm systems are easy to install, can be self-monitored, and are controlled with a smartphone app. Alarms.org can help homeowners find the best security system for their home.

Hide gifts in an interior room

Before breaking into a home, a burglar usually peeks through the window. At a glance, the burglar can see what’s easy to steal. For this reason, it’s best to keep any gifts well hidden. Consider putting them in a bedroom closet or another windowless area where they can’t be seen from any window.

Get a safe that doesn’t look like a safe

If someone does gain access to a home, one of the first things they look for is a lockbox or safe. Burglars tend to take safes with them and open them later. Rather than using a traditional safe or lockbox, consider buying a safe that looks like an everyday item. A small lockbox that looks like a book, for example, is less likely found by intruders.

Having a deadbolt is helpful, but there are a few upgrades that can make a doorway safer. For starters, make sure the screws holding the strike plate in place are at least two or three inches long. With longer screws in place, the door will be harder to kick in.

In addition, upgrading to an automatic lock that’s controlled by a smartphone offers more security since homeowners can double-check the lock when they’re away.

If there are any signs that a homeowner is gone, criminals will seize the opportunity. If homeowners plan to travel, it’s important to make sure there are no signs of absence that can tip off criminals. Have neighbors get the mail, put lights on timers, and have snow removed.

Snatching gifts or cash from an unlocked car takes seconds. Make sure criminals don’t have easy access to a car by locking the doors – even when it’s in your driveway. Adding outdoor lighting that’s triggered by motion sensors is a good idea as well. If someone comes near a car at night, the lights could be enough to scare them away.