Most Dangerous Countries for Travel

According to the World Tourism Organization, tourism to every continent (save for Antarctica) increased in 2018. In fact, international tourism is at a never before seen peak, spurned by an increase in average incomes around the world, the convenience of booking trips over the internet, and the development of additional tourist sector infrastructure in South and Southeast Asia.

With all of the increased tourist traffic, does that mean that the world has become a safer place for travelers? For some regions — Southeast Asia and South America — the answer is yes, but there remains a lot of countries where a number of factors — with the threat of violence being chief among them — render said countries seriously risky prospects for the budding world traveler.

In order to help you keep tabs on which countries pose the greatest risks to you and your traveling companions, we’ve compiled a ranking of the most dangerous countries for tourists. Our dangerousness score is based on five factors: security, political conditions, the quality of medical help, environmental factors, and infrastructure.

Each of these factors is determined using two or more quantitative variables and weighted based on their relevance to tourists. Since tourists are typically visiting a country for a short duration, threats to their security are the most pressing, so that factor has been given a weight of 50%, while the factors’ weights range from 10% to 15%.

What makes these countries so dangerous?

In short, security threats are what makes the countries at the top of the list so dangerous for tourists, although these threats emerge from different angles. 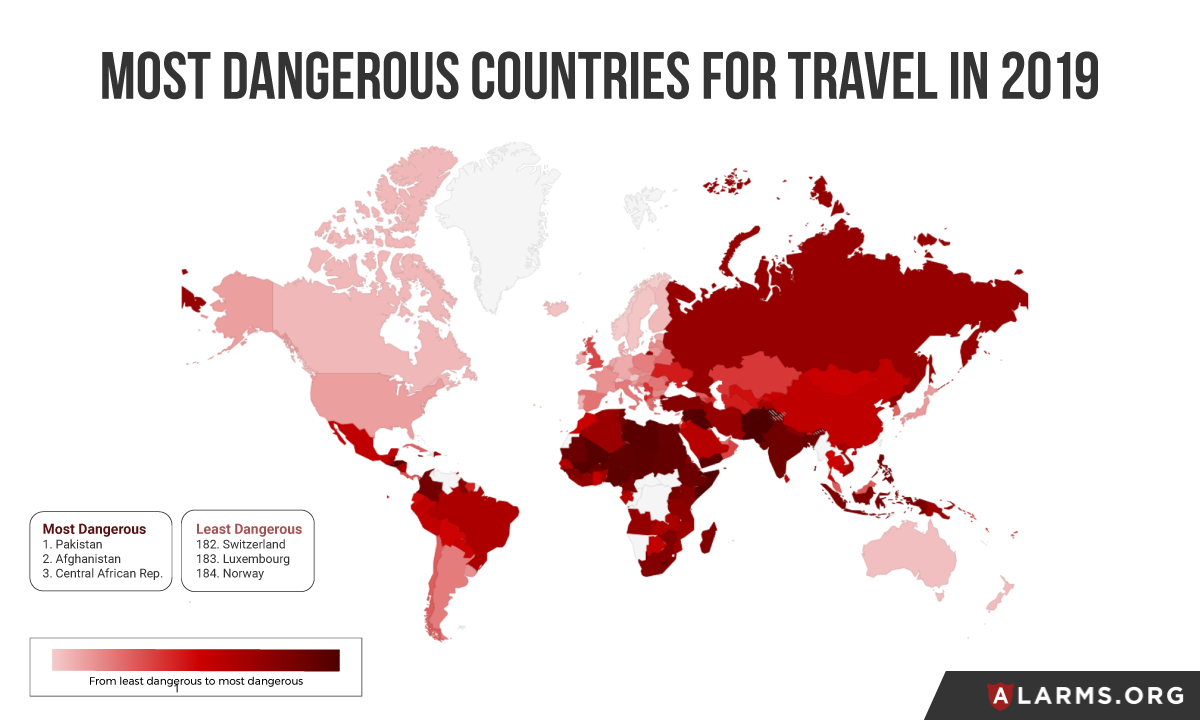 #1 Pakistan, #2 Afghanistan, and #4 Iraq do not have the highest homicide rates of the countries on the list, but these countries do have a lot of active terrorist organizations operating within their borders, making them risky for tourists not wanting to be harmed in a public bombing. Their high threat of terrorist violence earns them high 3 or 4 Advisory Levels from the U.S. State Department.

The Sub-Saharan African countries in the top ten — #3 Central African Republic, #6 Somalia, and #7 Mali — all pose a risk from terrorist action, not as high as in the most dangerous Near East countries, yet have higher homicide rates and receive higher scores in other factors, including unstable governments, high risk of road death (C.A.R.), poor medical care, and high risk of death attributed to the environment.

The Latin American nations in the top ten, #5 El Salvador and #9 Honduras, have catastrophically high homicide rates that catapult them to the front end of the list, and has compelled many of the citizens of these violent, fraught nations to seek asylum in the United States, accounting for much of the supposed migrant crisis at the southern U.S. border.

Other nations high on the list, like #8 Syria and #11 Yemen are currently undergoing vicious, dragged out civil wars, which should be enough reason for tourists to steer clear of them, for the time being.

Where are the most dangerous (and safest) countries located?

A majority of the most dangerous countries for tourists are clustered in two main regions: the Near East and Sub-Saharan Africa, which together account for 25 of the top 30 most dangerous in the world.

Historically, as in recent times, Near East nations have been plagued by terrorism, sectarian violence, and war. Many of these countries, including #2 Afghanistan, #4 Iraq, and #8 Syria have experienced significant intervention by foreign militaries, which has often increased instability in these nations. The high number of active terrorist organizations in the region (9 in Pakistan, 5 in Afghanistan) further add to the security risk posed towards tourists.

Sub-Saharan Africa, which accounts for over 50% of the top 30, is plagued by similar issues of violence and terrorism as those of the Near East (although to a slightly lesser degree), with the added concerns of a high risk of disease, lack of clean food and potable water, and poor infrastructure.

The other region with a large presence near the top of the ranking is Central America, with the staggeringly high homicide rates of El Salvador (#5) and Honduras (#9) propelling them into the top ten.

In general, these are the regions of the world tourists may consider it wise to avoid, or enter with extreme caution.

On the opposite end of the spectrum, Western Europe is the safest region to travel to, with 15 of the 20 safest nations in the ranking located in the region.

Rank of dangerous countries for travel

Where has the security risk to tourists increased recently?

According to World Bank Data, 9 of the top 30 most dangerous countries for tourists, including #1 Pakistan, #5 El Salvador and #9 Honduras in the top 10, have seen an increase in the homicide rate over the most recent year for which data is available.

The most alarming increase is El Salvador’s +22.6 per 100,000 rise in homicides, something akin to a war taking place among its population. The Bahamas (#77), one of the most popular tropical vacation destinations for North Americans, follows with the second highest uptick of +9.3 per 100K.

Some countries like Colombia (#27) and Uruguay (#157) that have experienced a significant decrease in overall violence over the past couple decades witnessed a minor rise in homicides of about 1 per 100K, but this is nothing to be too alarmed about, as they receive a Level 2 and Level 1 advisory from the State Department, respectively.

Despite the short-term increase in homicide, Colombia has a lot to celebrate in recent years: in the 80’s and 90’s, the country endured a long stretch of violence and civil unrest under the dark cloud of drug kingpin Pablo Escobar, and the drug trade in general, but has emerged as an up-and-coming travel destination with thousands of square miles of beautiful, biologically diverse parkland and budget-friendly, cosmopolitan cities.

Ranking of countries based on change in violence, more

Which dangerous countries are getting safer?

The three nations in our ranking to experience the greatest drop in homicide rate are Tuvalu (#70), Seychelles (#115) and Jamaica (#31). This is great news as all three are island nations in three different regions of the world whose economies rely heavily on tourism.

Tuvalu’s decrease of -9.2 per 100K is the largest by far. The tiny nation is sadly one of the world’s poorest, and not blessed with jaw-dropping mountain ranges or great cultural draws, yet its fine beaches render it a worthwhile pacific island destination.

Jamaica, known for its beaches, flavorful cuisine, and cultural exports such as reggae music, has historically struggled with violence. The country’s very high homicide rate has earned it #31 on this list and a Level 2 advisory from the State Department, yet the -4.9 per 100K drop in intentional homicides bodes well for the future, both for its reputation as a tourist destination and for its people.

Some of the world’s most dangerous for countries for tourists, like Afghanistan (#2), Iraq (#4), and Yemen (#11) also saw a drop in homicides, although it is still ill-advised to travel to these nations.

Ranking of countries based on change in violence, less

Which countries remain heavily visited hotspots for tourism — despite the risks?

A few countries earning relatively high positions on the ranking, such as Egypt (#19), India (#24), and the Philippines (#26), nevertheless attract millions of visitors every year. For most travelers, the beauty and cultural allure of these countries outweigh the possible risks.

Despite a sharp -42.5% drop in visitors from 2015 to 2016 (the most recent year for which data is available) owing to political instability and increased threat of terrorism, 5.3 million visitors flocked to Egypt to take in its ancient wonders. As stability increases, tourism to Egypt will likely begin to rebound at a quick rate.

India is #24 on our ranking, yet the large country attracted 15.5 million visitors in 2017 for a one year increase of 6.7%. Despite its relatively chaotic urban environments, and recent environmental disasters, India continues to expand its tourism economy and is currently #7 in Asia.

The Philippines (#26) is an interesting specimen, as several of the archipelago nation’s areas (such as Marawi) remain far too dangerous and strictly off-limits to tourists, whereas others like El Nido and Boracay are very safe and attract hundreds of thousands each year.

Do the State Department advisories agree with our rankings?

It’s a bit comforting that our ranking of the most dangerous countries for tourists–based on advanced statistical analysis and weighting of data–strongly coincides with the severity of U.S. State Department Travel advisories for individual countries.

Of the top 10 in our ranking, 7 receive the highest warning of “Level 4: Do Not Travel”, with #1 Pakistan, #5 El Salvador, and #9 Honduras earning a “Level 3: Reconsider Travel” advisory (the latter two pose significant threats of violence, but perhaps their lack of a strong terrorist presence keeps them from earning a Level 4).

Of countries #11 through #20 on the ranking, the war-torn nations of #11 Yemen and #18 Sudan earn Level 4 advisories, with 6 others receiving Level 3 advisories. Egypt, a perennial favorite of tourists due to the Great Pyramids and other ancient Egyptian ruins and relics (and has seen visitor numbers sag in the past decade due to increase Islamic Fundamentalist terrorist activity) receive a “Level 2: Exercise Increased Caution”.

#17 Lesotho, a small Sub Saharan nation surrounded on all sides by South Africa, is the only country in our top 20 to receive a “Level 1: Exercise Normal Precautions”, although the country is plagued by the high homicide rates and poor medical care endemic to the region.

With countries #20 to #30 on our ranking, we witness a significant decrease in the State Department advisory levels, overall. #20 – 23 (Burkina Faso, Guinea-Bissau, and Mauritania all in Sub-Saharan Africa) all garner Level 3 warnings, whereas the following 7 countries receive a Level 2.

Interestingly (but not surprisingly) the next country in our ranking to receive a Level 4 advisory from the State Department (below #18 Sudan, the preceding Level 4 earner) is North Korea (#48). Due to its extreme adversarial relationship with the US, American citizens were banned from traveling to the country altogether in 2018, although visitors from other countries continue to travel to the nation without serious issue, although on heavily regimented and chaperoned tours.

The last country in our ranking to receive a Level 4 advisory from the U.S. State Department is #54 Iran. Again, the explanation here for the discrepancy between our dangerousness rating and the department’s severe advisory is the frosty relationship between the two countries.

However, there is no official ban on U.S. travelers and many Americans experience few issues during their travels, leaving with a positive impression of the country and its people, geoglobal politics aside.

What precautions can tourists take to minimize risks to their safety?

No matter which country you travel to, there will be risks. Here are some quick tips on avoiding negative consequences while traveling:

Just because a country is in the, say, top 50 of our ranking doesn’t mean it should be avoided at all costs. Sometimes the positives of traveling to a country do indeed outweigh the possible risks. However, it’s always advised to be well aware of those risks and prepare accordingly. Smart travelers protect themselves and have a plan for every scenario.

A score for each country was created based on five factors: Security, Political conditions, Medical help, Environmental factors, and Infrastructure. The weights assigned to each factor are as follows:

There are more than 220 countries in the world. However, we do not have all the data for all the countries. After collecting the data sets, we found that 47 countries had to eliminated from the ranking process because they lacked data on all variables in any one (or more) variable groups.