As each state and region of the United States has its distinct advantages and weaknesses in the aspects of car ownership that matter most to motorists, attempting to compile a conclusive ranking of “the best states for driving” would be a fool’s errand. Instead, we’ve isolated some of the most important factors for drivers, including gas prices, daily commute times, insurance rates and others that drivers want to know about in order to focus the spotlight on the states that shine in each category. If you wake up and commute thirty minutes to work every day, you’re probably well aware of where your state excels or comes up short, but hopefully this article will provide you with a broader understanding of the driving situation throughout the United States.

Best states for filling the tank 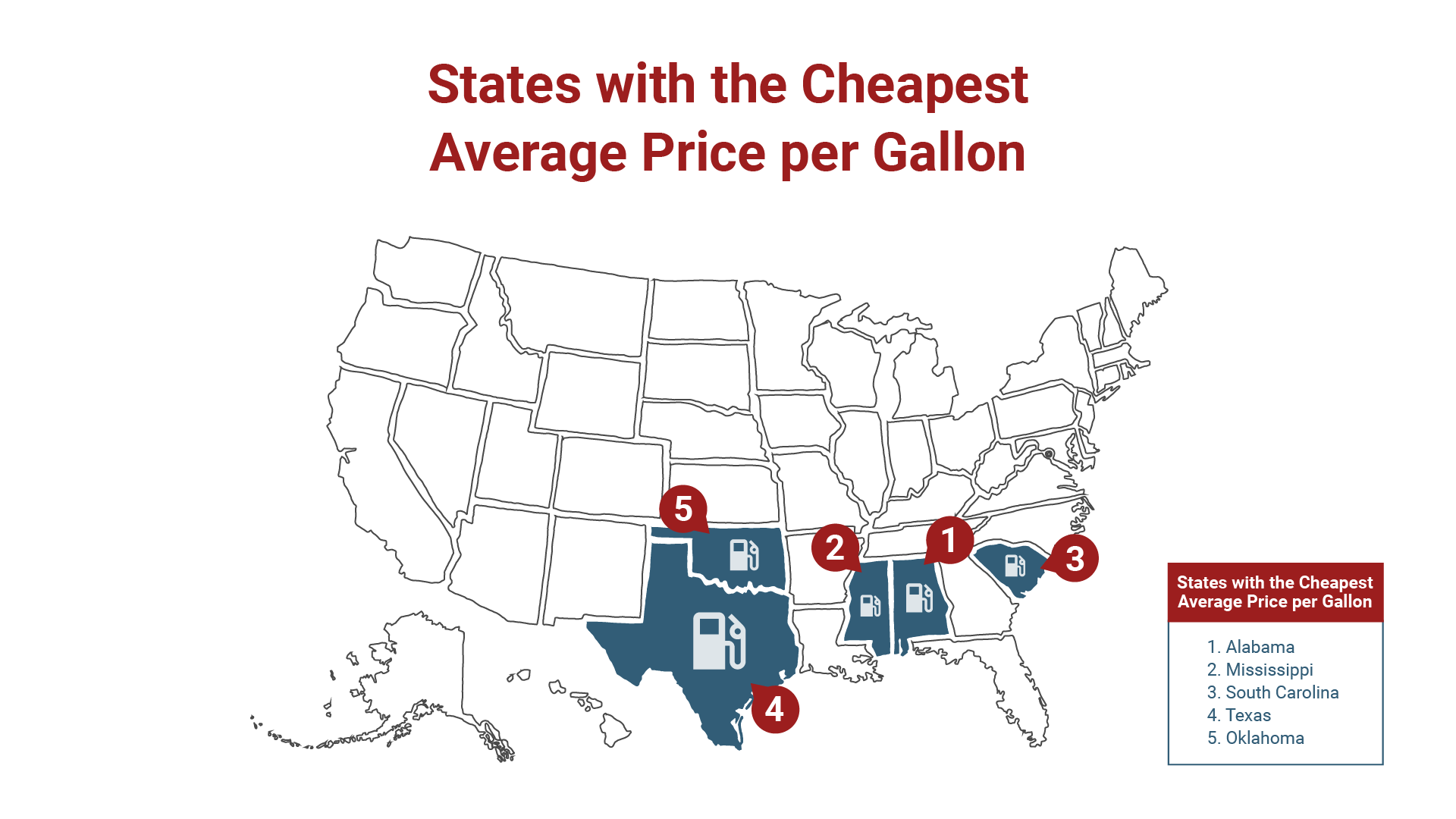 Regularly filling the tank with expensive fuel is the principal annoyance for most drivers. This obligation hits those in lower income brackets the hardest, when keeping the car full of gas can prove a significant household expense.

On average, southerners experience a lot less pain at the pump than those up north. Southern states dominate in the category of lowest average gas prices in the U.S., as all of the top five states are located below the Mason-Dixon Line.

The south generally boasts lower gas prices for a few reasons. First off, southern states have a greater concentration of oil refineries (especially Texas), which reduces the cost of transporting fuel over great distances. Furthermore, states in the Southeastern United States have lower per-capita incomes than the richer northern states. Lower gas prices in Alabama and Mississippi reflect the reality that their inhabitants have less to spend on gas. The same trend is seen in property costs and other common living expenses.

Taxes are also a big factor: the states with the lowest gas prices all tend to tax gas at a much lower rate compared to—say–California.

States with the cheapest average price per gallon:

States with the most tolerable commutes 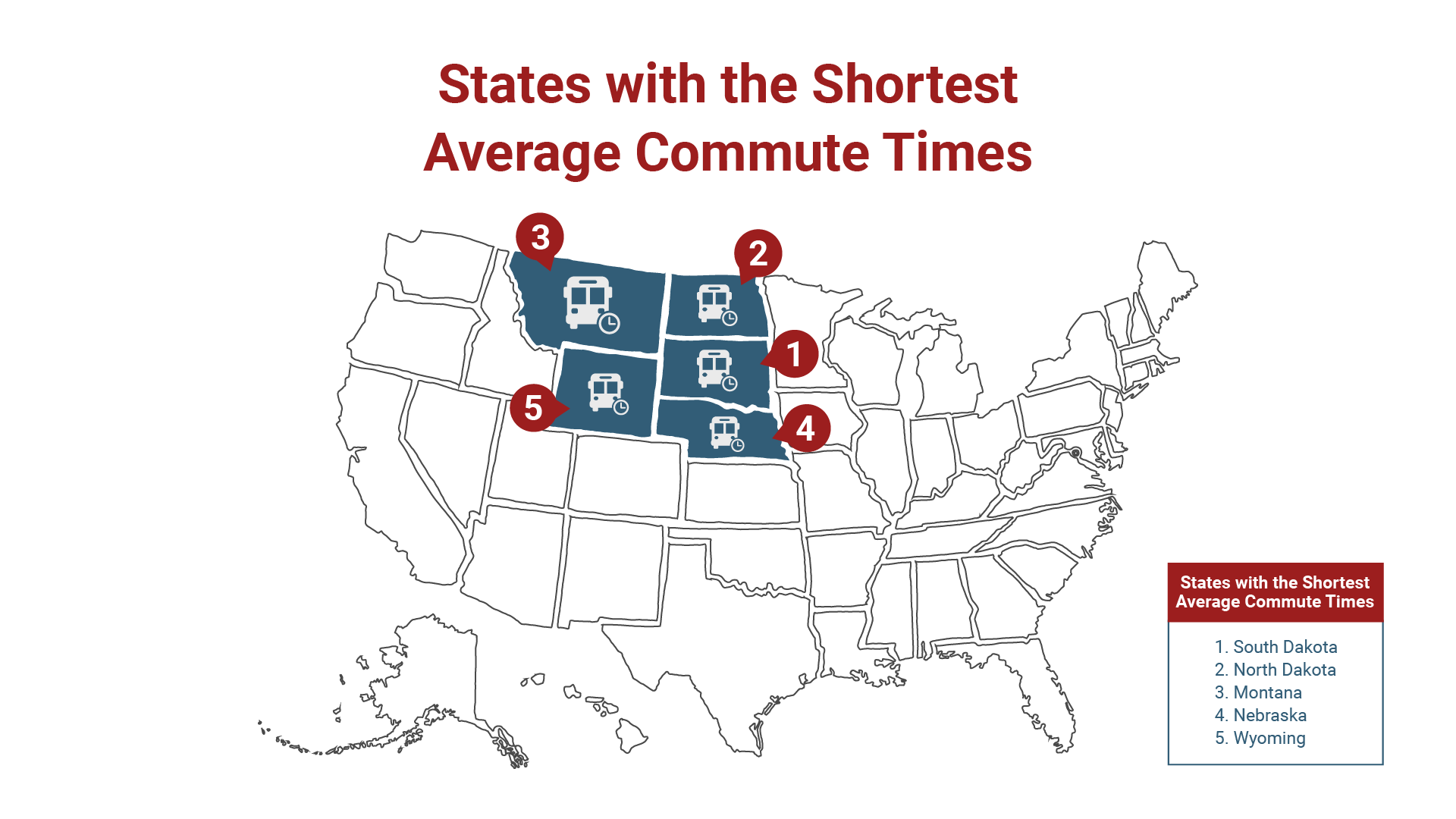 While the south offers the lowest gas prices, sparsely populated states in the high plains and mountain regions of the nation boast the shortest travel times between home and work. The reason is simple: less cars on the road means less traffic and a zippier commute. Each of the top five in this category are also among the top ten least densely populated states in the U.S.

Anyone that has driven through Wyoming or Montana can attest to the fact that there is seldom any semblance of road congestion. In these states, one can often drive for miles without encountering another vehicle on the road. This lies in stark contrast to the heavy traffic experienced by those in heavily populated states of the Eastern seaboard and other major metropolitan areas in the nation. Driving to work in New York City or Chicago is often a major headache, with bumper-to-bumper traffic and accident delays, galore. Such is not the case for Wyoming cities. 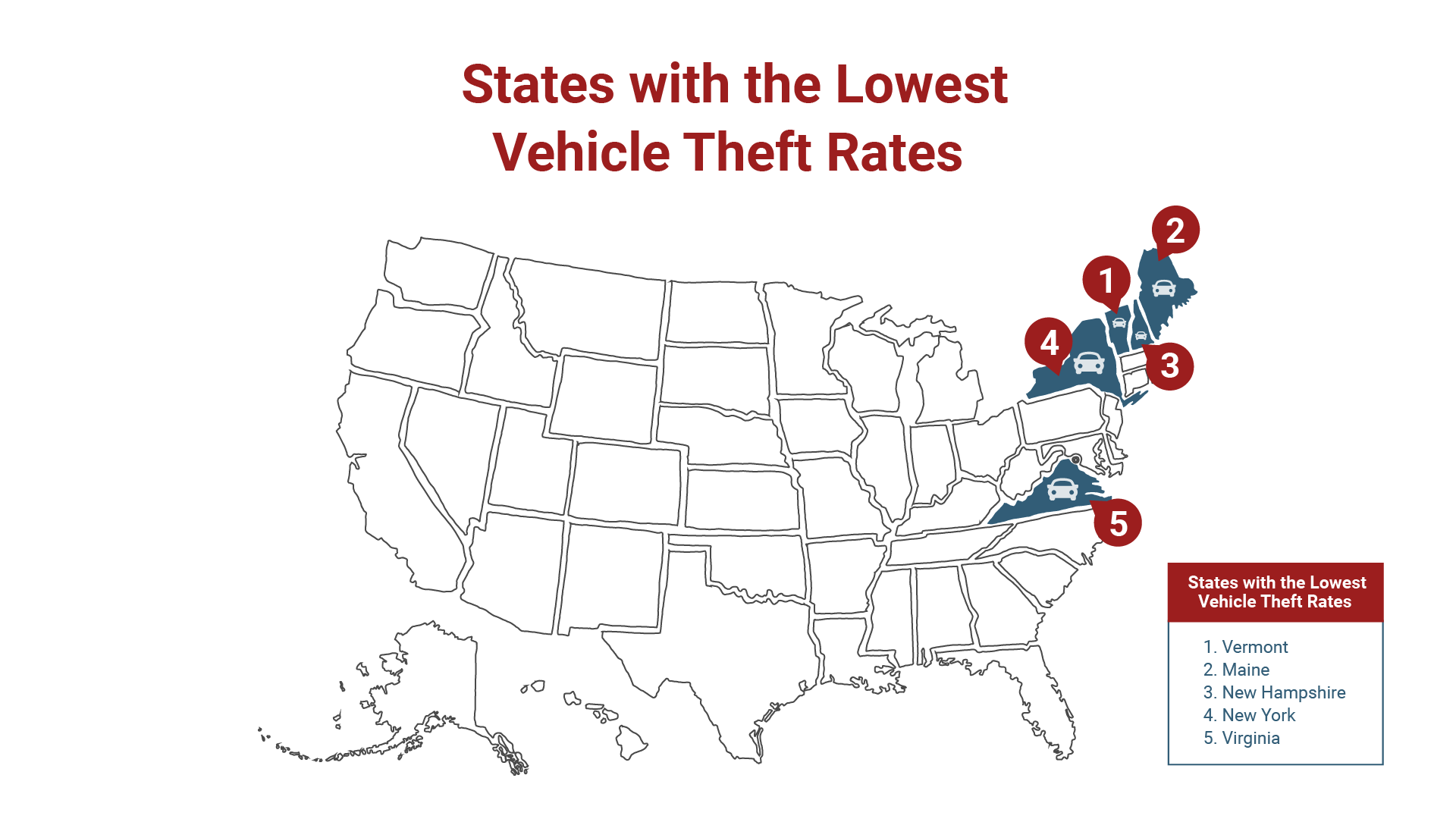 In the category of lowest vehicle theft rates, the Northeast takes the prize, accounting for four of the top five. Unsurprisingly, states like Maine and New Hampshire are also some of the safest to live in, with the lowest crime rates in the U.S.

There is no doubt a correlation between the frequency of car theft and crime rates, in general. Where there is relatively little crime overall, fewer cars are getting stolen. This rule mostly holds nationwide, save for the glaring exception of Washington, which has one of the lowest crime rates in America, yet holds the dubious distinction of leading the nation in vehicle thefts per 100,000 residents.

States with the lowest vehicle theft rates (thefts per 100,000):

States with the best driving records 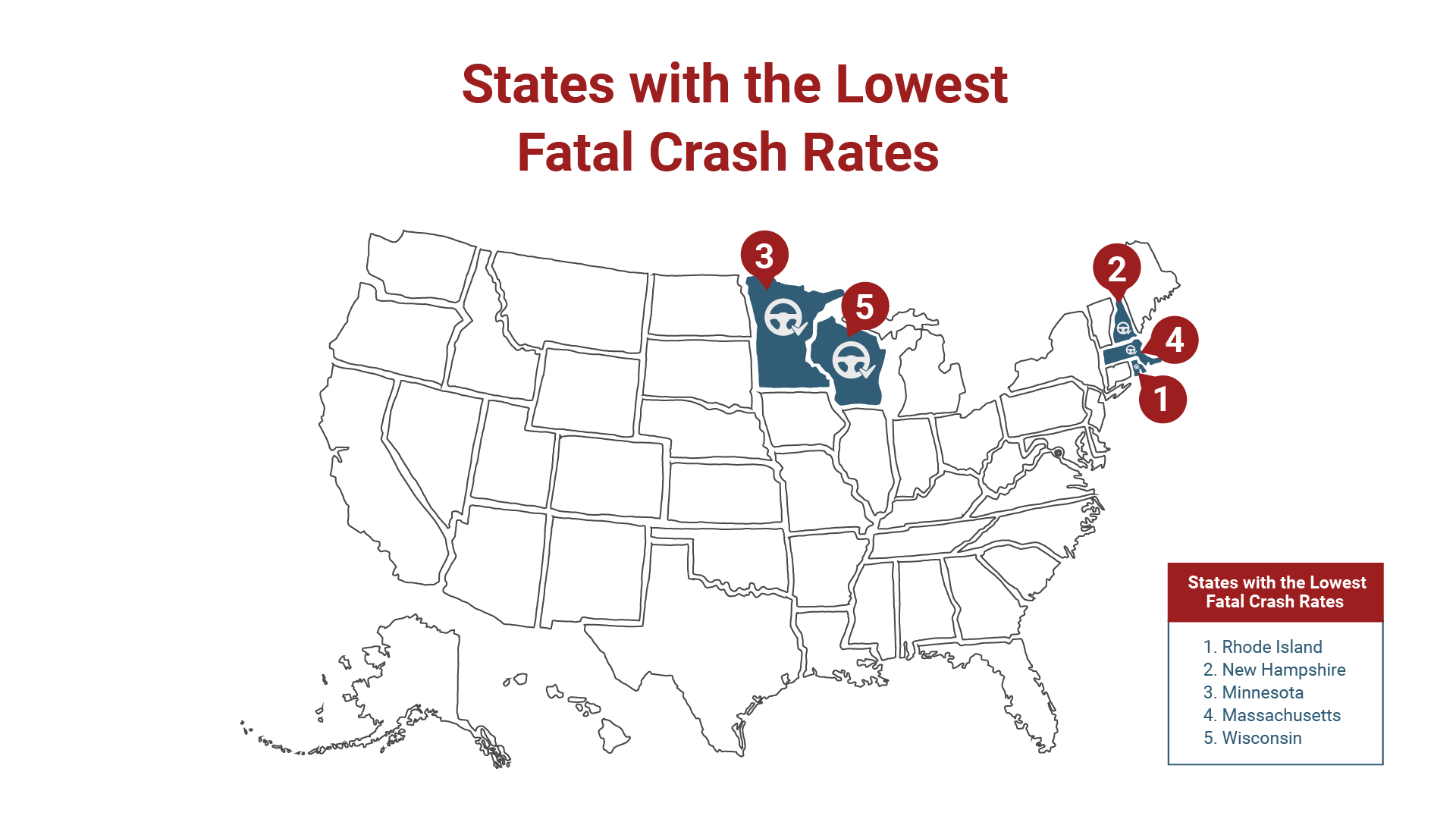 There isn’t a broad, evident pattern in this category, as individual characteristics contribute to a state’s reputation as either a safe or dangerous state to drive in. This ranking takes the statistics from each state’s most dangerous highway, and compares them amongst one another. If a state has one notoriously dangerous highway, then it will place poorly in a ranking of the safest states for driving.

One possible factor in determining the relative safety of a state’s roads is its latitude. Most of the states with safer highway ratings are in the north and have lower average temperatures. Perhaps colder temperatures and hazardous weather conditions prompt residents to drive more slowly and carefully than those in warmer states, where reckless, high speed driving is more prevalent.

States with the lowest fatal crash rates (calculated based on number of road fatalities and fatal crashes, adjusted for average daily traffic counts):

States with the friendliest insurance rates 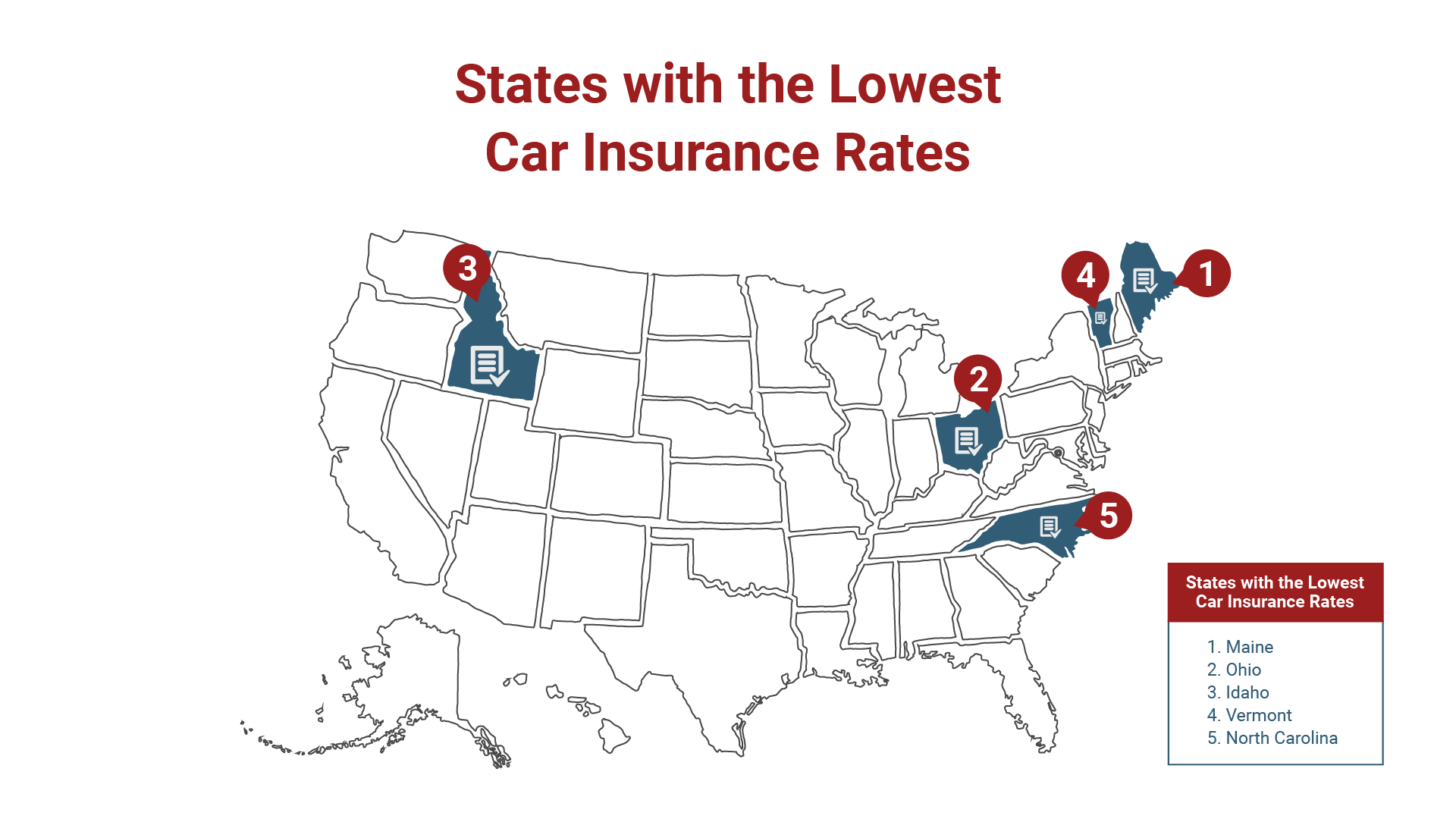 Numerous factors influence car insurance rates across the nation, and there isn’t really a regional pattern. The number of insurance companies offering service in a given state, concentration of uninsured drivers on the road, average number of claims filed per year, state demographics and a host of other causes can influence prices. Usually, but not always, rural states have lower annual premiums than densely populated ones.

There’s a wide variance between the states with the cheapest and most expensive rates, as Michigan, the state with the highest average premiums, has an average cost of $2,394, well over twice that of Maine, which at $864, boasts the lowest premiums.

Best States to get a tune-up 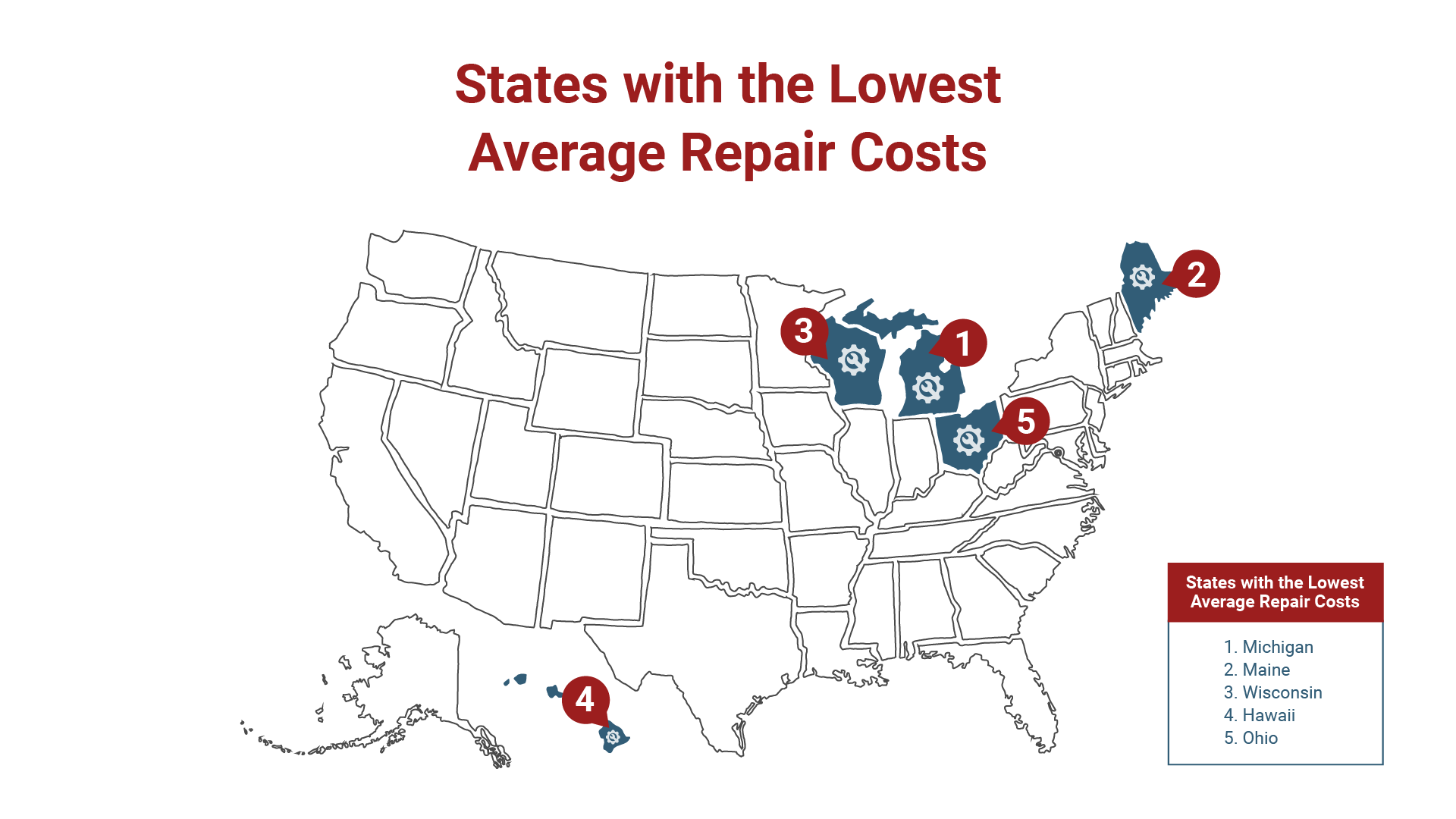 Michigan potentially makes up for offering the worst car insurance prices by coming in as the state with the lowest average repair costs. The availability of cheap replacement parts and relatively cheap labor costs accounts for its placing. Maine, Wisconsin, Hawaii and Ohio all owe their position on the list to low local cost of parts, as well.

Throughout the country, there isn’t a significant gap in the cost of labor from state to state. Connecticut, the state with the most expensive average car repair costs, actually boasts an average labor cost 30 cents less than that of Michigan.

The cost of parts, on the other hand, can vary widely, and proves to be the determining factor in how much repairing a car will set you back in a given state.

Most scenic drives in the United States 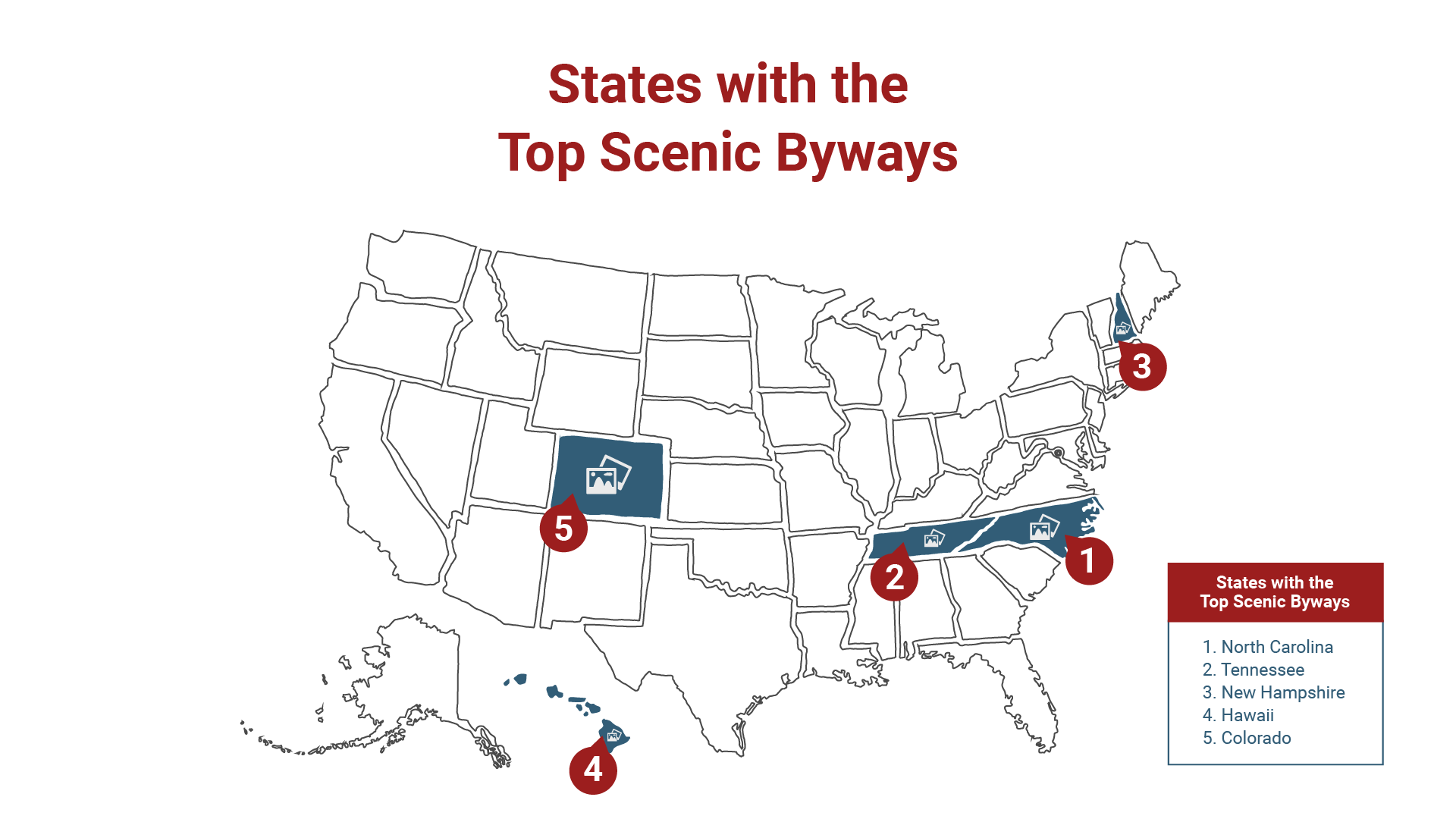 Obviously, this ranking is far more subjective than the others. There is no way to quantitatively measure the ephemeral qualities of a beautiful stretch of road. Yet, this top five from noted travel guide Fodor is a good start.

Stunning mountain ranges, lush greenery, flowing rivers and sparkling seas, or better yet, the juxtaposition of one or more of these traits, play a huge role in making a scenic byway truly memorable. The roads on this short list are all famous for offering pristine views of remarkable geographical features.

Topping Fodor’s list is the world renowned Blue Ridge Parkway, a 469 mile stretch of winding highway through the southern Appalachians that allows motorists to experience a broad range of landscapes, rich variety of flora and fauna and plenty of opportunities to pull off the road for a hike, night of camping, or just to relieve one’s self amongst nature’s abundance.

Other roads on the list offer similar voyages through loping peaks, distinct geographical features and plenty of natural eye candy. However, the quality and quintessence of a given stretch of highway is ultimately up to the individual. If towering mountains and winding roads make you queasy, perhaps Nebraska’s long, flat stretches of corn and pasture-lined highway and enveloping horizon are more your style.

Or maybe you prefer stark, rocky desert landscapes to thick forests or sprawling farmland, in which case, you’d prefer speeding through Arizona’s Sonoran Desert, with its lofty saguaros and dispersed patches of sage and creosote bush.