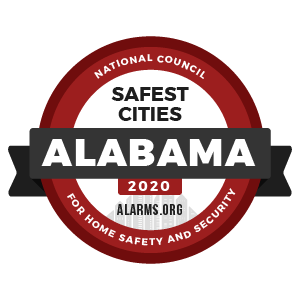 With a high violent crime rate of 5.20 per 1,000 and property crime rate of 28.17, Alabama is not among the safest states. However, the Cotton State’s safest cities recorded admirably low crime figures in 2018 that stand in contrast to Alabama’s statewide numbers. Let’s have a closer look at Alabama’s 5 safest communities.

The safest city in Alabama is Mountain Brook, an affluent suburb of Birmingham with a population topping 20K. Mountain Brook’s 2018 violent crime rate of 0.79 per 1,000 was the 2nd lowest in the state, and while the city’s total crime rate wasn’t Alabama’s best, Mountain Brook is boosted in the ranking by its excellent law enforcement-to-residents ratio of 3.49 per 1,000.

Another wealthy Birmingham suburb, Vestavia Hills, earns the 2nd spot on the list. The city of 34,000 logged just 30 violent crimes in 2018, amounting to a rate of less than 1 offense per 1,000 people. Additionally, Vestavia Hills’ property crime rate is less-than-half of the statewide rate.

Ranking 3rd is Helena, a city of just over 19K in Jefferson and Shelby counties that has been named one of the “best places to live”  by Money magazine. Helena’s violent crime rate of 3.15 per 1,000 is decent, if not spectacular, however, the city truly distinguishes itself through its excellent property crime rate, which is the lowest in the state by a considerable margin.

#4 Pelham is one of the fastest-growing cities in the state. Named for a Confederate Civil War officer and home to Oak Mountain State Park, Pelham logged a respectable 1.51 per 1,000 violent crime rate in 2018, as well as a property crime rate below the national average.

Daphne, a family-friendly city of  26.6K on the eastern shoreline of Mobile Bay, earns the 5th spot on the list. Boasting low rates of violent and property crime, as well as a high ratio of law enforcement-to-residents, Daphne is one of the best places to live in the Mobile area.