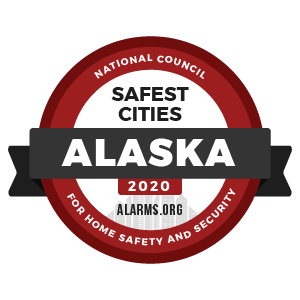 America’s largest state has plenty of qualities–including a rugged and expansive natural environment and a high economic opportunity rating–although safety isn’t one of them. Alaska’s violent crime rate of 8.85 per 1,000 is the highest in the nation, while its property crime rate is second only to New Mexico’s. Of Alaska’s 4 cities to meet our population parameters, a couple of them perform well in certain crime categories compared to statewide rates, but not by much.

State capital Juneau places #2 in the ranking of Alaska’s safest cities. The city’s violent crime rate is a shade below the statewide average, and its property crime rate–though quite high–is below that of Anchorage, Alaska’s largest city.

Fairbanks is Alaska’s 3rd safest city. With a population of about 31K, Fairbanks is around the same size as #2 Juneau, yet earned both a lower property crime rate and violent crime rate than the preceding city. However, Fairbank’s low law enforcement-to-residents ratio of 1.36 per 1,000 drops it down to the 3rd spot.