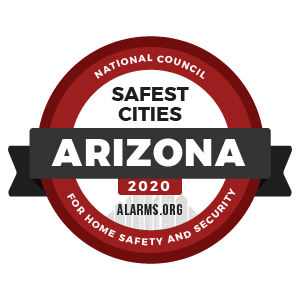 Looking at Arizona’s statewide crime rates, the Copper State doesn’t compare favorably to the rest of the country, recording violent and property crime significantly above national levels in 2018. However, Arizona’s 5 safest cities performed much better than statewide crime figures would suggest, each recording a total crime rate below 15 per 1,000.

Arizona’s safest community is Florence, a historic town that is one of the oldest in the state. While Florence has a rich history, the town distinguishes itself in modern times by earning an excellent safety record. Florence’s total crime rate of 6.20 per 1,000 is less-than-half of that of any other Arizona community’s.

Paradise Valley is Arizona’s 2nd safest municipality, as well as the state’s wealthiest. The town recorded just 3 violent crimes in 2018, resulting in the lowest violent crime rate in the state.

Ranking 3rd is Oro Valley, an affluent suburb of Tucson notable for the many high tech firms headquartered in the town. Oro Valley posted very impressive crime numbers in 2018, including a violent crime rate of 0.38 per 1,000 that is less than 10% of the statewide rate.

Maricopa, a city of nearly 50K in the Gila River Valley, earns Arizona’s 4th spot. The city achieved the 2nd lowest total crime rate in the state in 2018, just 11.96 per 1,000, and falls to #4 only due its lower-than-average ratio of law enforcement-to-residents.

Closing out the list of Arizona’s 5 safest communities is Sahuarita, a town of around 30,000 15 miles south of Tucson that was once colonized by the Spanish. Today, Sahuarita belies its somewhat turbulent history by recording a low violent crime rate of 1.27 per 1,000.