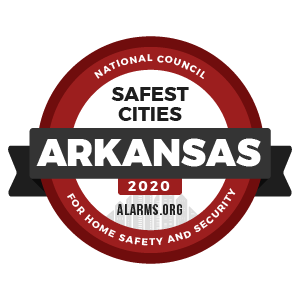 Like other states in the south central region of the United States, Arkansas has an issue with crime. The state’s violent crime rate of 5.44 per 1,000 is 47% above the national rate, and it doesn’t fare much better in property crime. Yet, that isn’t to say that Arkansas is without safe communities, as a handful of the state’s cities posted admirable crime rates in 2018, irrespective of statewide rates.

Bella Vista is Arkansas’ safest city by a wide margin.  The resort/retirement community offers plenty of amenities to visitors and residents, such as golf courses, swimming pools, and tennis courts. Folks in Bella Vista always have plenty to do, which may explain why the city’s total crime rate of 8.54 per 1,000 is 32% lower than the next-lowest entry.

Arkansas 2nd safest city is Centerton, a suburban bedroom community in Benton County whose population has shot up in recent decades. Folks are drawn to northwest Arkansas’ strong, diversified economy, as well as Centerton’s low crime: the city’s 8.79 per 1,000 rate of property crime is less than one-third of the statewide rate.

Ranking 3rd is Bentonville., the largest city in the state’s top 5 with a population over 51K. Famous as the birthplace and headquarters of Walmart, Bentonville has less-than-half of the violent crime of Arkansas, on a whole.

#4 Cabot, a mid-sized suburb of state capital Little Rock, may be the best place to live for those who work in the larger city. Cabot’s violent crime rate of 1.47 per 1,000 is the lowest in the state, but the city is kept from the top spot due to its slightly higher level of property crime.

Maumelle (#5) fills out the list of Arkansas’ 5 safest cities. The Pulaski County city’s total crime rate is higher than those of preceding entries, yet Maumelle still earned violent and property crime rates below state and national averages.