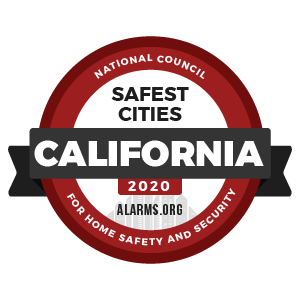 However, with a state as large and diverse as California, there’s bound to be a high variance in crime rates and other characteristics between the state’s cities. Sure enough, California’s safest cities performed very well in both major crime categories.

California’s safest city is Imperial, a sun-baked community of around 18K in the Colorado Desert. Perhaps it’s too hot for Imperial’s residents to commit crimes, as the city’s 0.5 per 1,000 violent crime rate and 4.28 per 1,000 property crime rate combine for the lowest total crime rate in the state by a significant margin.

Hillsborough is California’s 2nd safest community. Part of the San Francisco Bay Area, the wealthy town is entirely residential, with commercial zoning. This may contribute to Hillsborough’s low property crime rate of 7.77 per 1,000.

#3 Palos Verdes Estates is an affluent Los Angeles County city famous for being master-planned by Frederick Law Olmsted Jr., the great American landscape architect. The city logged a remarkable 0.44 per 1,000 violent crime rate, which is the 2nd lowest in the state of California.

Earning the 4th spot is Truckee, a colorfully-named town in Nevada County in the northern part of the state. Truckee excels at churning out world-class skiers and snowboarders, like Stacey Cook and Travis Ganong, as well as at keeping its inhabitants safe: the city recorded a violent crime rate of around 1 offense per 1,000 people in 2018.

Sierra Madre, a Los Angeles County city in the foothills of the San Gabriel Valley, is California’s 5th safest city. Once named an “All-America City”, Sierra Madre distinguished itself in 2018 with a 0.63 per 1,000 violent crime rate and property crime rate below 10 per 1,000.