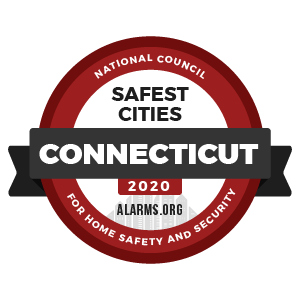 Crime–particularly violent crime–is low in Connecticut: the state’s violent crime rate of 2.07 offenses per 1,000 people is just 56% of the nationwide rate. It should serve as no surprise, then, that crime rates in the Nutmeg State’s safest cities are among the lowest in the United States.

Connecticut’s safest community is Ridgefield, a Fairfield County town of 25K located at the foothills of the Berkshire Mountains. Ridgefield logged just a single violent crime in 2018, and had a property crime rate of 2.53 per 1,000. With such low crime, it’s fair to say that Ridgefield is one of the safest places in America.

The 3rd safest community in Connecticut is Old Saybrook, a town just over 10,000 in Middlesex County. Old Saybrook’s crime figures are very similar to those of the preceding entry on the list, though the city had slightly lower violent crime and slightly higher property crime than Ledyard.

Connecticut’s #4 spot belongs to New Canaan, a wealthy town which at one point had the highest median family income in the nation. In 2018, New Canaan earned the state’s lowest violent crime rate (an honor it shares with Madison) due to the fact that no violent crimes were reported in the town during the year.

Newtown, another mid-sized Fairfield County town, earns the 5th position on the list. The town’s crime rates are, in many cases, more impressive than those of preceding entries, but Newton drops a couple of positions solely due to its low ratio of law enforcement-to-residents.