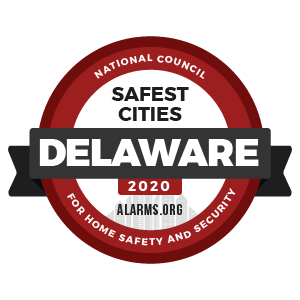 Delaware posted slightly concerning crime numbers in 2018: its 4.24 per 1,000 violent crime rate is about 15% higher than the national rate, though the state fared a bit better in the category of property crime, earning a rate 5% higher than national levels. With a couple exceptions, the crime situation in Delaware’s 5 safest cities is a bit more optimistic that the state’s at large.

The safest city in Delaware is Newark, a city of 34K in New Castle County 12 miles south of Wilmington, the state’s largest city. Home to the University of Delaware, Newark earned violent and property crime rates below state and national levels in 2018, while its total crime rate is tied for the lowest in the state.

Smyrna earns the #2 spot in the ranking of Delaware’s safest cities. Though crime in Smyrna is on par with statewide levels, the city has one of the largest law enforcement-to-resident ratios in Delaware, which helps to keep the city’s residents safe.

Ranking 3rd is Middletown, a New Castle County city of 22,350. Middletown’s violent crime rate of 2.86 per 1,000 is the lowest in the state, while its total crime rate is tied for the lowest. The only thing keeping Middletown out of the top spot is its low law enforcement-to-residents ratio.

There’s a bit of a dip between Delaware’s top 3 safest cities and the remaining entries on the list, as #4 Dover and #5 Milford are each plagued by violent and property crime double the national rate in both categories. However, one bright spot for the cities is their high ratios of law enforcement-to-residents, which are both above 3.5 per 1,000.