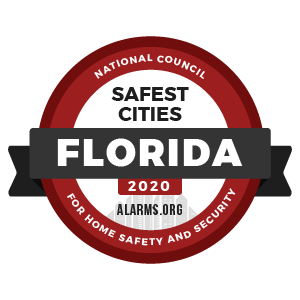 Florida isn’t exactly at the bottom of the list of the safest states in the country, but it certainly isn’t at the top, either. The Sunshine State logged violent and property crime rates just a notch above national levels in both categories.

Elevated levels of crime in Florida’s many large cities, including Jacksonville, Miami, and Tampa, no doubt raise statewide crime rates, though the state is home to many smaller communities with impressive safety records.

Satellite Beach is the safest city in Florida. The coastal city of 11K experienced a remarkably low amount of crime in 2018, including a violent crime rate less than 10% of the national rate, and a property crime rate six times less than statewide levels.

Florida’s 2nd safest community is Key Biscayne, a small island town east of Miami in Miami-Dade County. While Key Biscayne is often one of the first areas to be evacuated in the case of a hurricane, due to its exposed location, residents need not add crime to their list of potential threats: the city recorded just 5 violent crimes in 2018 for a low rate of 0.38 offenses per 1,000 people.

#3 Marco Island has a lot in common with Key Biscayne: both are tourist-frequented island communities where crime is scarce. Marco Island’s violent and property crime rates are even lower than those of the prior entry’s, yet the city falls slightly due its lower law enforcement-to-residents ratio.

#5 Parkland is the only non-oceanside community in Florida’s top 5 safest cities, though it’s just a short drive from the coast. While the city gained national attention for the tragedy occurring in the city in February, 2018, Parkland is generally exceedingly safe, boasting violent and property crime rates several times below statewide levels.