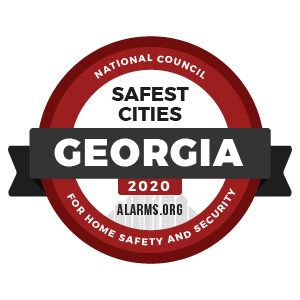 Georgia is in the middle-of-the-pack in terms of crime compared to the rest of the U.S.: the state’s violent crime rate of 3.26 per 1,000 is around 12% lower than the national rate, though its property crime rate of 25.74 per 1,000 is 17% above national levels. While Georgia’s statewide crime rates are a mixed bag, the Peach State’s 5 safest cities earned remarkably low crime rates in 2018. Let’s take a closer look.

Braselton is the safest community in Georgia by a wide margin. The small town, which straddles 4 different counties, recorded just 1 violent crime in 2018, and its property crime rate was nearly 5 times lower than the Georgia statewide rate.

#2 Holly Springs logged 2018 crime rates nearly as remarkable as those of #1 Braselton’s, including a 0.24 per 1,000 violent crime rate and a property crime rate below 10 per 1,000. It’s not hard to see why the small city has earned numerous awards and honors in the past decade.

Georgia’s 3rd safest city, Johns Creek, is a great degree larger than the preceding entries on the list, with a population over 85K. However, that didn’t stop the city from recording terrific crime rates more characteristic of a small town, including a violent crime rate just over 10% of the national rate.

Ranking 4th is Milton, a wealthy city of nearly 40K in Fulton County with low levels of crime on par with prior entries on the list. Few cities in the country accomplish the feat of posting a violent crime rate less than 10% of the national rate, along with a property crime rate below 8 per 1,000, yet Milton did both in 2018.