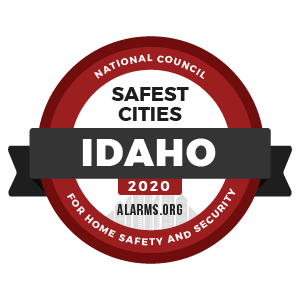 Idaho posted significantly lower-than-average property and violent crime rates in 2018, earning it a spot in the top 10 safest states in the U.S. The Gem State is the fastest growing in the nation, and while a growing population often indicates an uptick in crime, rates in Idaho actually dropped in 2018, overall (although violent crime went up slightly). What’s more, Idaho’s 5 safest cities all recorded crime rates below the national averages in both major categories.

Rexburg is the safest city in Idaho. The rapidly growing Madison County city logged just 5 violent crimes in 2018, for a violent crime rate considerably lower than any other in the state. Rexburg also distinguishes itself with its low level of property crime, which is less-than-a-quarter of national levels.

Idaho’s 2nd safest city is Meridian, which, with a population of over 103K, is the 3rd largest city in the state. Though Meridian’s crime figures aren’t quite on par with #1 Rexburg’s, the city did really well in 2018, logging a violent crime rate less-than-half of the national rate.

3rd in the ranking is Moscow, a city of around 25K near the Washington border that is home to the University of Idaho. While college towns often witness elevated levels of crime, Moscow recorded a low violent crime rate of 0.51 offenses per 1,000 in 2018, the 2nd lowest in Idaho by a wide margin.

Two cities with “Falls” in their names fill out the countdown of Idaho’s 5 safest cities: Post Falls and Idaho Falls. Post Falls, a suburb of Coeur d’Alene in Kootenai County, is #4 on the list. In 2018, the city earned violent and property crime rates below statewide levels. Not far behind is Idaho Falls (#5), the commercial and cultural hub of eastern Idaho, which had crime rates slightly below national levels in 2018.