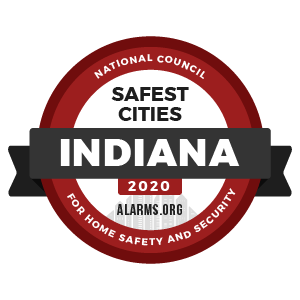 Indiana is right in the middle of the pack among U.S. states in terms of crime: the state’s violent and property crime rates are about as close as you can get to the national averages in both categories. The situation in the Hoosier State’s safest cities is very different, however, with each of the top 5 logging crime rates that compare favorably to the safest in the country.

Crime is scarce in St. John, Indiana’s safest community. The town of 17.6K logged just 3 violent crimes in 2018, good for a rate of 0.17 offenses per 1,000, while its property crime rate is less-than-a-third of the national rate.

Indiana’s 2nd safest city is Dyer, a town which neighbors #1 St. John in Lake Country, and nearly matches its low levels of crime. The southeastern suburb of Chicago recorded only 10 crimes in 2018, along with a remarkable 8.38 per 1,000 rate of property crime.

Chesterton is Indiana’s 3rd safest city. One of a trio of cities known as the Duneland area for being home to Indiana Dunes National Park, Chesterton logged a violent crime rate below 1 offense per 1,000 in 2018, and its property crime rate is slightly lower than #2 Dyers.

#4 Carmel’s low crime rates are all the more impressive in light of its size: the city’s population tops 94,000. Recording a violent crime rate of 0.46 per 1,000 in 2018 (the state’s 3rd lowest), Carmel’s crime situation resembles that of a much smaller community.