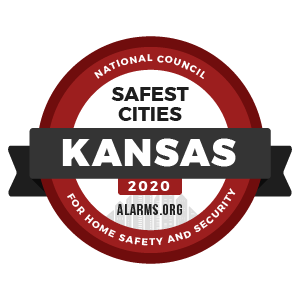 Crime is higher than you’d expect in Kansas, in light of its image as a modest, down-to-earth midwestern state. The state’s violent crime increased by 10.9% in 2018, and its violent crime and property rates are both higher than national averages. That said, the situation in Kansas’ safest cities stands in contrast to that of the state at large. Each of the state’s 5 safest cities logged crime rates below state and national levels in both major categories.

McPherson is Kansas’ safest city. The county seat of the county sharing its name, McPherson has a rich history dating back to the mid 19th century, and is home to two colleges. Additionally, the city has remarkably low crime: its violent crime rate of 1.74 per 1,000 is well below half of the statewide rate, while its property crime rate is less than 10% of national levels.

#2 Leawood recorded equally low crime rates in 2018. The Kansas City suburb of 35,000 earned the state’s lowest rate of violent crime, a remarkable 0.77 per 1,000. While Leawood’s property crime rate is not quite as low, it is nevertheless below state and nationwide levels.

Kansas’ 3rd safest city is Lenexa, which, with a population topping 54K, is the largest city in the top 5. The city is notable as the birthplace of tech giant Garwin, and recorded impressive crime rates for a city its size, including a violent crime rate less-than-half of the statewide rate.

There’s a slight uptick in violent crime between Lenexa and the following two entries on the list, however, #4 Lansing still performed well in 2018. The small Leavenworth County city managed to earn a violent crime rate 57% of the statewide rate, while its property crime is well below half of the statewide level.

Closing out the list is Gardner (#5), the 3rd Johnson County city in the top 5. Gardner recorded respectable violent and property crime rates just a notch higher than those of Lansing, the preceding entry on the list.