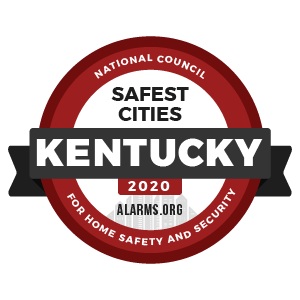 Compared to nationwide levels, Kentucky has admirably low levels of crime. The Bluegrass State’s violent crime rate of 2.12 per 1,000 is around 57% of the national rate, while the state’s rate of property crime is below average, as well. Much more impressive are the crime rates of Kentucky’s safest cities, which are a fraction of the already-low statewide rates.

Kentucky’s safest city is Independence, a home rule-class city of 28K in Kenton County. Kenton recorded just 23 violent crimes in 2018 for a remarkable violent crime rate of 0.82 offenses per 1,000. The city’s property crime rate is even more impressive, just over one-quarter of the national average.

Erlanger, Kentucky’s 2nd safest city, earned crime rates nearly as low as the top entry on the list. The Kenton County city logged a crime rate below 1 offense per 1,000, while its 8.09 per 1,000 property crime is just a notch higher than the preceding entry’s.

Though violent crime is twice as high in #3 Madisonville compared to Kentucky’s #1 and #2 safest cities, it’s still considerably below the national rate. What makes Madisonville so safe is its high law enforcement-to-residents ratio of 3.06 per 1,000.

Mount Washington, the 4th city in the ranking, earned a 0.82 per 1,000 violent crime rate matching #1 Independence’s. The city’s slightly higher property crime rate is the only thing keeping it from the top spot.

Last but not least is Lawrenceburg (#5), a small city in Anderson County that in 2018 earned the lowest violent crime rate in Kentucky, due to the fact that the city recorded a mere 4 violent crimes in the year. As with Mount Washington, Lawrenceburg is brought down only by its marginally higher rate of property crime.