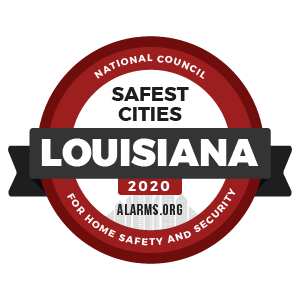 Louisiana has a lot of qualities, however, low crime isn’t one of them. The state is plagued by the violent crime endemic to the southeastern region of the United States, and was named the most violent state in the country by USA Today for logging the highest murder rate in the country. Despite the state’s reputation, a handful of Louisiana cities are relatively safe, posting admirably low crime rates that stand in contrast to the situation, statewide.

Louisiana’s safest city is Mandeville, a small city separated from New Orleans by Lake Pontchartrain. Home to many musicians, Mandeville is well removed from the violence plaguing its neighbor across the lake, recorded a low violent crime rate of 1.29 per 1,000 in 2018, along with a property crime rate below the national level.

Covington earns the #2 spot on the list. The parish seat of St. Tammany Parish logged a 2018 violent crime rate of about half of the statewide rate, as well a slightly-below-average level of property crime.

We head north for #3 Minden, a city of 12K in Webster Parish. The small city logged a violent crime rate less-than-half of the national rate (and under a third of the Louisiana rate) in 2018, and its property crime rate is a notch below national levels.

4th in the ranking is Gretna, the 2nd largest city in Jefferson Parish located on the west bank of the Mississippi River. Though Gretna’s crime levels are a bit higher than the three preceding entries on the list, they are nonetheless significantly below statewide rates.

Abbeville, the parish seat of Vermilion Parish, closes out the ranking of Louisiana’s 5 safest cities. While the city has an issue with violent crime, its property crime rate is the 2nd lowest in the state.