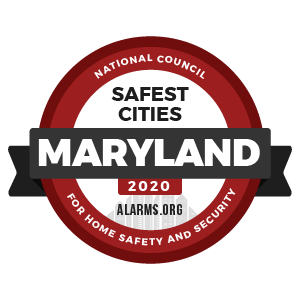 Thankfully, other Maryland cities do not suffer from the same high level of crime seen in Baltimore. In fact, the Old Line State’s safest cities have admirably low crime rates, even if they don’t compare with the safest in the nation–albeit with one exception.

Maryland’s safest city is Ocean Pines, an affluent resort community of over 12,000 in Worcester County. Ocean Pines’ low crime rates place it in a league of its own among Maryland cities: the city earned a 1.14 per 1,000 violent crime rate in 2018, which is one-quarter of the statewide rate. Additionally, the city’s property crime rate of 4.25 per 1,000 is less-than-a-third of the next-lowest in the state.

Havre de Grace, Maryland’s 2nd safest city, doesn’t quite match the safety record of #1 Ocean Pines, yet recorded laudable crime rates of its own in 2018. The city, which was named one of the best small towns in the U.S. to visit by Smithsonian Magazine, has violent and property crime well below state and national levels.

#3 New Carrollton is located inland, just 10 miles east of Washington, D.C.. The city of 13K logged a violent crime rate 17% lower than the national rate in 2018, as well as the state’s 3rd-lowest property crime rate.

Bel Air earns the #4 spot in the ranking, a town of 10,000 just cracking our population parameters. Although property crime in the town is slightly above the national rate, the city recorded a violent crime rate less-than-half of the state average.

#5 Bowie is much larger than other top 5 entries, with a population near 60K, yet managed to earn the state’s 2nd lowest violent crime rate: a very respectable 1.35 per 1,000.