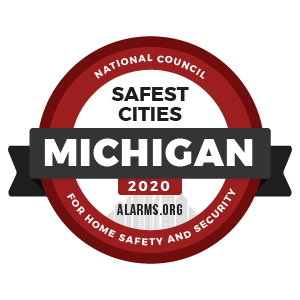 The crime situation in Michigan is one of contrasts: the state has 1 of the top 15 highest violent crime rates in the U.S., yet its property crime rate is well below the national level. Meanwhile, the state is home to some of the highest crime areas in the country (Flint, parts of Detroit), as well as communities where crime is exceedingly scarce. Today, let’s put the focus on the safest cities in the Great Lake State.

Grosse Ile Township is the safest community in Michigan. The municipality comprises several islands within the Detroit River and was named by French explorers who visited the area in the 17th century. In 2018, Gross Ile posted some of the lowest crime figures in the country: a 0.30 per 1,000 violent crime rate, and a 3.36  per 1,000 property crime rate.

Michigan’s 2nd safest community is Rochester, a city of 13K north of Detroit. With just 8 reported violent crimes and property crime 6 times below the national rate in 2018, Rochester earns its place in the upper echelon of safe cities in America.

#3 South Lyon is not far behind: the Oakland County city recorded a property crime rate similar to the two prior entries on the list, albeit with a marginally higher violent crime rate of about 1 offense per 1,000.

Beverly Hills, another Oakland County suburb, is Michigan’s 4th safest municipality. The largest village in the state is also one of those with the least amount of crime, logging just 5 violent crimes and 57 property crimes in 2018.

Hamburg Township, the most populated municipality in Livingston County,  earns Michigan’s #5 spot. The village recorded the lowest total crime rate in all of Michigan, and is kept out of the top position only due to a low law enforcement-to-residents ratio of 0.82 per 1,000.