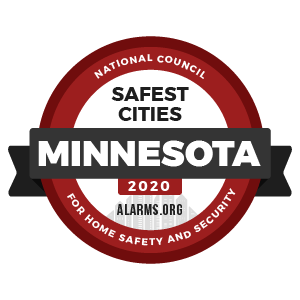 True to its friendly image, the Land of 10,000 Lakes has violent and property crime rates below national levels. What’s more, violent crime has dropped in Minnesota for the last ten years straight, including an 8% drop between 2017 and 2018.

While the Twin Cities of St. Paul and Minneapolis are among the safest urban areas of their size in the country, they don’t make the cut for the list of Minnesota’s five safest cities, which is a collection of smaller communities spread across the state.

The safest city in Minnesota is Orono, a city of about 20,000 located on the north shore of Lake Minnetonka. Crime is nearly nonexistent in Orono: the city recorded just 6 violent crimes in 2018 and has a property crime rate less-than-a-third of the national average.

Big Lake is Minnesota’s 2nd safest city. A quiet lakeside community known for its annual “Spud Fest”, Big Lake has the lowest property crime rate in the state, along with a violent crime rate of exactly 1 offense per 1,000.

Minnesota’s 3rd safest “city” is the combined jurisdiction of the South Lake Minnetonka Police Department, comprising parts of the communities of Excelsior, Greenwood, Shorewood, and Tonka Bay. Together, they logged just 3 violent crimes in 2018.

Earning the #4 spot is Minnetrista, which continues Minnesota’s streak of remarkably low violent crime by posting a 0.39 per 1,000 violent crime rate in 2018, coupled with a property crime rate below 10 per 1,000.

The city of Stillwater, located on the St. Croix River just west of Wisconsin, rounds out the list of Minnesota’s 5 safest cities. Known as the shooting location for many popular Hollywood films, including Fargo and Grumpy Old Men, Stillwater logged 2018 violent and property crime rates of about one-third of national levels.