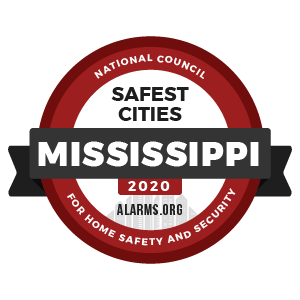 Mississippi’s safest city is Madison, a city of over 25,000 in the Jackson Metropolitan Area. The city logged just 18 violent crimes in 2018, resulting in a 0.7 per 1,000 violent crime rate, and its property crime rate is less-than-half the national rate.

Brandon, another Jackson area city, is the state’s 2nd safest. The city earned the lowest property crime rate of any in the state, which is just a third of the national rate, while its violent crime rate is an impressive 1.24 per 1,000.

The 3rd city in the ranking, Clinton, earned the lowest violent crime rate in the state, a remarkable 0.60 per 1,000. However, its property crime rate–on par with national levels–keeps it out of the top spot.

Closing out the top 5 is Oxford, which had the 2nd lowest violent crime rate in the state in 2018. Yet, the city’s above average property crime, perhaps stemming from being home to the University of Mississippi, pushes it down in the ranking.