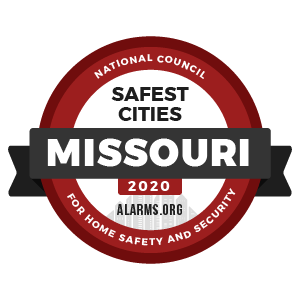 Missouri does not have one of the best safety records in the U.S.: its violent and property crime rates are both above national levels, propped up by some of the more crime-ridden urban areas in the state.

However, there is good news for residents of the Show-Me state: violent crime in the state is declining faster than it is nationwide, with a 5.2% decrease between 2017 and 2018. Meanwhile, property crime is steadily declining, as well.

The crime situation in Missouri’s 5 safest cities paints a very different picture than the state, at large, as each of them earned a violent crime rate near-or-below 1 offense per 1,000 residents in 2018, which is 20% or less of the statewide rate.

Webster Groves is Missouri’s safest city. The wealthy, medium-sized St. Louis suburb logged a crime rate just above 1 per 1,000 in 2018, while its property crime rate is just one-third of the national rate.

Missouri’s 2nd safest city is Ballwin, a St. Louis suburb repeatedly named “One of America’s Best Places to Live” by Money Magazine. On paper, Ballwin’s crime rates may be the most impressive in the state, as it’s 0.30 per 1,000 crime rate is less than a third of #1 Webster Grove’s already-low rate. The city’s slightly higher property crime rate keeps it out of the top spot.

#3 Town and Country’s violent crime rate is even lower than Ballwin’s: the suburb of 11,000 recorded just 2 violent crimes in 2018.  However, the city’s marginally higher rate of property crime drops it to the 3rd position.

Eureka, the 4th entry in the ranking, recorded crime rates only slightly less impressive than the three preceding entries. The city, which is home to the Six Flags St. Louis amusement park, has a violent crime rate just above 1 per 1,000.

Missouri’s 5th safest city, Kirkwood, is also the 5th consecutive St. Louis suburb on the list. The city’s low rates of violent and property crime are nearly identical to those of #4 Eureka’s.