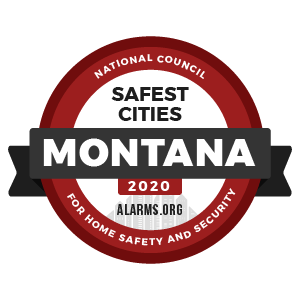 While Montana has a lot of things in common with its neighbor Wyoming, an excellent safety record is not one of them. While a number of Wyoming cities earned a violent crime rate below, or around, 1 offense per 1,000 residents, no Montana city managed that feat. Property crime is also an issue in Montana, as 3 of the 5 cities in the sparsely-populated state had property crime rates over double the national rate in 2018.

Bozeman is Montana’s safest city by a considerable margin. The city, which is home to Montana State University, is the sole city in the state to record violent and property crime rates below national levels in both categories in 2018. Bozeman’s 2.16 per 1,000 violent crime rate is impressive considering its size, and the fact that it is a major university city, which typically produces an uptick in crime.

The 2nd safest city in Montana is Kalispell, a city of 23,700 that serves as the gateway to the expansive Glacier National Park. Kalispell is an issue with property crime–it’s rate is nearly 30% higher than the national level–yet the city is one of two Montana cities to record a violent crime rate below the national rate.

There’s a significant increase in crime between the two safest cities in Montana, and the rest of the state’s cities: #3 Helena’s 6.14 per 1,000 violent crime rate is considerably higher than the national rate, and its property crime is double national levels. However, the city has the highest ratio of law enforcement-to-residents at 2.41 per 1,000, which should serve as comfort to some.

The final two cities in Montana’s top 5, #4 Missoula and #5 Billings, logged very similar crime rates in 2018: their property crime rates are almost identical (and over twice the national rate), while Billing’s violent crime rate of 5.42 is about 20% higher than Missoula’s.