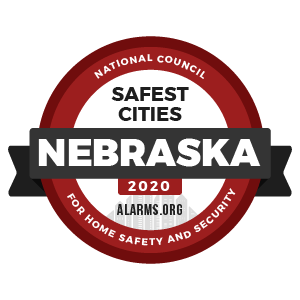 Nebraska’s safest city is La Vista, a suburb of Omaha in Sarpy County. La Vista’s property crime rate of 15.72, while not spectacular, is well below the national rate. However, the city’s violent crime rate is the best in the state, and the only one under 1 offense per 1,000 people.

The 2nd safest city in Nebraska is Columbus, the county seat of Platte County. Columbus has crime rates similar to the #1 entry on the list, with only the slightest increase in violent crime, and a slightly lower ratio of police officers-to-residents.

#3 Norfolk’s population of 24K makes it one of the top 10 largest cities in Nebraska. The city is quite safe, as well, with a low violent crime rate comparable to the two preceding entries on the list, and a property crime rate about 18% higher than #2 Columbus’s.

There’s a bit of a drop off between the 3rd and 4th safest cities in Nebraska, as #4 Papillion earned a crime rate 67% higher than Norfolk’s. Nevertheless, Papillion’s violent and property crime rates are still below state and national levels.

Nebraska’s 5th safest city, Bellevue, is much larger than preceding entries: its population of 53.7K is over double that of Norfolk’s, the next largest city. However, Bellevue logged a virtually identical property crime rate as the three cities before it, and its rate of violent crime is only marginally higher.