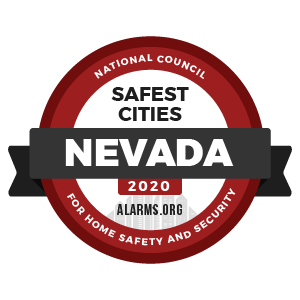 Nevada is officially the fastest-growing state in the nation, according to the U.S. Census Bureau. Unfortunately, one of the characteristics of a rapidly expanding population is an elevated level of crime, and, sure enough, Nevada has violent and property crime rates above the national average in both categories.

However, the Silver State is home to three cities where crime is impressively low, along with two more where the situation is improving. Here’s a closer look at Nevada’s safest cities.

Boulder City is the safest city in Nevada. The city is one of just two cities in the state where gambling is prohibited, which is perhaps one of the reasons why crime is so low: Boulder City’s violent crime rate of 0.81 per 1,000 is less-than-half of the that of the Nevada city with the next-lowest violent crime rate.

Nevada’s 2nd safest city, Mesquite, is a Clark County city near the Arizona border known for its golf courses and casino resorts. While Mesquite’s crime record doesn’t quite match that of #1 Boulder City’s, it’s violent and property crime rates are significantly below state and national levels.

3rd on the list is Henderson, a large city of over 310K to the southeast of Las Vegas. Although Henderson is home to numerous gambling casinos, its crime rates are below national rates, proving that legalized gambling does not necessarily lead to elevated crime.

Elko is Nevada’s 4th safest city.  Compared to national levels, Elko’s violent and property crime rates are a bit above average, yet the city makes up for it with its status as the economic and cultural center of northeast Nevada.

In a twist, the Las Vegas metropolitan area earns the 5th spot in the list of Nevada’s safest cities. While the city’s violent and property crime rates are a touch above average, they are impressively low for an urban area its size.