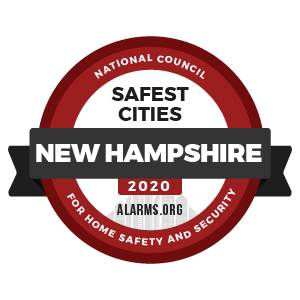 New Hampshire is one of the safest states in America, logging the 3rd lowest violent crime rate and the lowest property crime rate in the nation. The Granite State’s reputation for safety is reflected in the low crime rates of its 5 safest cities.

Durham is the safest municipality in New Hampshire. The Strafford County town has a history of settlement dating back to the mid 17th Century, and is home to the University of New Hampshire. Durham’s violent crime rate of 0.65 per 1,000 is remarkable for a town that houses a large public university.

The 2nd safest community in New Hampshire is Raymond, a peaceful town of 10.4K in Rockingham County. Only 10 violent crimes were reported in Raymond in 2018.

Merrimack, a town in Hillsborough County named after a Native American term for sturgeon, is 3rd in the ranking of New Hampshire’s safest communities. Despite being over twice as large as the prior two entries on the list, Merrimack has even less violent crime, recording a mere 6 offenses in 2018.

#4 Milford continues New Hampshire’s streak of safe towns, logging under 10 violent crimes and 100 property crimes in 2018. Not far behind is #5 Londonderry, a town of over 26,000 that logged marginally higher crime rates than preceding entries, though they are still considerably less-than-half of national levels.