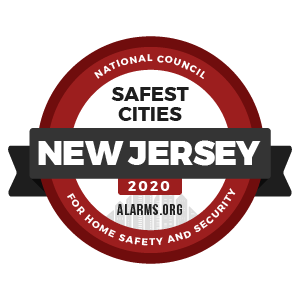 While New Jersey may be widely known as the setting of the classic HBO mob series, The Sopranos, in truth, the Garden State is among the safest in the nation, with violent and property crime rates well below national levels. Let’s take a look at New Jersey’s five safest cities, which are model communities for more than just their low frequency of crime. All five are located in the counties of Bergen and Morris.

River Vale is the safest municipality in New Jersey. The Bergen County township logged a single violent crime in 2018, and less than 25 property crimes.

The 2nd safest community in New Jersey is Tenafly, another small, affluent Bergen County community. Like River Vale, crime is a rarity in Tenafly: the city earned a violent crime rate of 0.1 per 1,000, along with a property crime rate less than 15% of the national rate, in 2018.

#3 Kinnelon of Morris County barely cracks our population parameters with a population just over 10K, yet deserves its spot due to being 1 of the 3 New Jersey communities in the top 5 to record just 1 violent crime in 2018.

Bergenfield earns the #4 spot on the list. The 3rd Bergen County community on the list has a lot in common with prior entries: near-nonexistent violent crime and scarce property crime. However, with a population over 27K, it is nearly 3 times the size of the first 3 New Jersey communities on the list, making its low crime rates even more impressive.

Rounding out New Jersey’s 5 safest cities is Mount Olive, a Morris County township similar in size to Bergenfield. Mount Olive’s property crime rate of 2.66 per 1,000 is nearly identical to that of the prior entry on the list, and it is a notch lower in the ranking only because it recorded several more violent crimes in 2018.