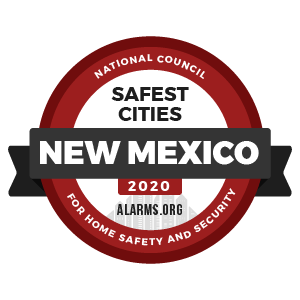 Unfortunately, New Mexico is one of the more dangerous states in terms of crime: its 2018 violent crime rate of 8.57 offenses per 1,000 residents is over 2 times higher than national levels, while its property crime rate is similarly high. Nevertheless, there are a handful of communities in the “Land of Enchantment” where violent crime is much less of a concern, although property crime is still an issue in most municipalities.

The safest city in New Mexico is Los Alamos, a community famous as the location of the development of the atomic bomb in the 1940’s. Today, Los Alamos boasts crime rates significantly lower than all other communities in the state, particularly in the area of property crime, where its 5.83 per 1,000 rate is less than one-third of the next-lowest city.

Rio Rancho is New Mexico’s 2nd safest city.  The fast growing Sandoval County city is one of just two in the state to earn violent and property crime rates below national levels.

3rd on the list is Lovington, a small city of around 11K in Lea County. Although property crime is slightly above average in the city, compared to the national rate, Lovington’s violent crime rate of 1.34 per 1,000 is well under half of the national rate.

New Mexico’s 4th safest city is Carlsbad, a city in Eddy County serving as the disembarkation point for visitors to Carlsbad Caverns National Park. While Carlsbad’s violent and property crime rates are above national levels, the city experiences less crime in all categories than New Mexico as a whole, on average, and has a high ratio of police officers to residents.

Closing out the list is Alamogordo, a city of over 31K in the Tularosa Basin. Though Alamogordo has an issue with property crime, its violent crime rate of 3.06 per 1,000 is below the national rate.