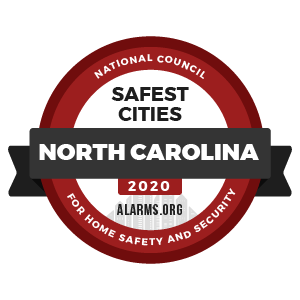 Overall, North Carolina’s violent and property crime rates are a bit above national levels in both categories, owing to high crime in large cities like Durham and Charlotte, where violent crime is nearly double the national rate of 3.69 offenses per 1,000.

However, the Tar Heel State’s safest communities stand in stark contrast to these crime-plagued urban areas, each offering a safe, secure environment to its residents.

Pinehurst is North Carolina’s safest municipality. The Moore County village of 16K is well known as the home of the famous Pinehurst Resort, a historic golf resort with a large area of its central village designated as a National Historic Landmark District. True to its image as an upper-crust resort community, Pinehurst recorded a low 0.93 per 1,000 violent crime rate, along with the lowest property crime rate in the state (6.85 per 1,000).

Davidson, a historic town that’s home to the prestigious Davidson College, is North Carolina’s 3rd safest community. In 2018, the town had a violent crime rate below 1 per 1K, as well as a property crime rate less-than-half of the national rate.

Placing 4th is Cary, which with a population topping 170,000, is the seventh-largest municipality in the state.  Despite Cary’s size, the town boasts remarkably low crime rates, including a 0.62 per 1,000 rate of violent crime.

Closing out the list of North Carolina’s 5 safest cities is Apex, a town that has experienced a population boom in recent decades due to nearby Research Triangle Park’s demand for skilled technology workers. Like other communities on the list, Apex’s violent crime rate is under 1 offense per 1,000.