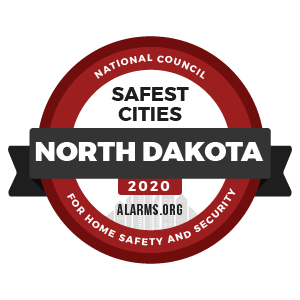 Crime has risen in North Dakota in recent years, coinciding with the shale oil boom that resulted in a rapid expansion of the state’s population and the growth of its economy. Nevertheless, North Dakota’s violent and property crime rates remain below nationwide levels in each category.  While the state’s safest cities don’t compare with the safest in the nation, they boast respectively low crime levels.

West Fargo is North Dakota’s safest city. Although the city has more than doubled its population since the year 2000, it earned an impressively low violent crime rate of 1.79 per 1,000, which is less than half of the national average.

North Dakota’s 2nd safest city is Dickinson, another community that has undergone a significant population expansion in the wake of the North Dakota oil boom. Though crime and homelessness have risen in recent years, Dickinson’s violent crime rate is comfortably below national levels.

Minot, known as “The Magic City” is North Dakota’s 3rd largest city, with a population of nearly 49K. Though its property crime rate is near the national average, Minot’s rate of violent crime is just 74% of the national rate.

Jamestown is North Dakota’s 4th safest city, logging crime rates very similar to #3 Minot’s, with below average violent crime and average property crime. However, Jamestown’s population is less than a third of the larger cities.

Grand Forks, fills out the list of the state’s five safety cities. Grand Forks mirrors the crime trends seen in other North Dakota cities by posting a violent crime rate of 2.57 per 1,000 and a property crime rate slightly above national levels.