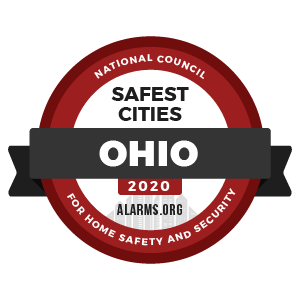 On a whole, the outlook on crime in Ohio is fairly positive, as the state’s 2018 violent crime rate of 2.8 offenses per 1,000 people was about 24% lower than the national average, while its property crime rate was just a notch lower than nationwide levels. However, Ohio’s safest cities do even better, boasting low crime rates on par with the best of the nation.

Olmsted Township is Ohio’s safest community. The Cleveland-area suburb of around 13,400 recorded just 2 violent crimes in 2018, for a stunning violent crime rate of 0.15 per 1,000, while its property crime rate is about 10% of the national average.

The 2nd safest community in Ohio is Brecksville, another wealthy Cleveland suburb of similar size to #1 Olmsted Township. Brecksville’s violent and property crime rates resemble those of the first entry on the list, albeit just a notch higher.

We move away from the Greater Cleveland area for #4 Poland Township, a community in Mahoning County located near the Pennsylvania border. Poland Township’s violent crime rate of 0.17 per 1,000 is just a hair higher than that of the top entry in the ranking.

Rounding out the list is Clearcreek Township (#5), a community of 15.7K that logged only 4 violent crimes and less than 50 property crimes in 2018.