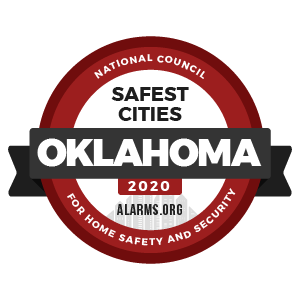 Although violent crime dropped nationally in 2018, Oklahoma witnessed a 1.9% increase of its violent crime rate, and it has higher levels of rape, murder, aggravated assault, and property crime–the four major violent crime categories–than the nation, at large. In the linked news story, Christopher Hill, an assistant professor of sociology at the University of Oklahoma, attributes the higher levels of crime to cultural and structural factors that plague the entire southeast region of the country.

Thankfully, Oklahoma’s crime problem is not endemic to all the state’s cities, and there a handful of communities with excellent safety records. Let’s take a look at Oklahoma’s 5 safest cities.

The safest city in Oklahoma is Guymon, a city of 11.5K in the state’s panhandle region. Guymon boasts strong local livestock and natural gas economies, as well as an impressive violent crime rate of 0.95 per 1,000, which is around 20% of state levels.

#3 Elk City is another modestly-sized city located on Historic U.S. Route 66 near the western edge of the state that boasts the state’s lowest violent crime rate, a mere 0.61 offenses per 1,000. Elk City’s property crime rate, nearly double those of the first two entries in the ranking, keeps it out of the top spot.

Coming in at #4 is El Reno, a city established during the 1889 land rush and named after the nearby Fort Reno. El Reno’s violent crime rate of 2.23 per 1,000 is a notch higher than preceding entries, yet well below state and national levels.

Edmond, a large city of 93.5K that is part of the Oklahoma City metropolitan area, completes the list of Oklahoma’s 5 safest cities. The city’s violent crime rate of 1.36 per 1,000 is stellar for a community its size.