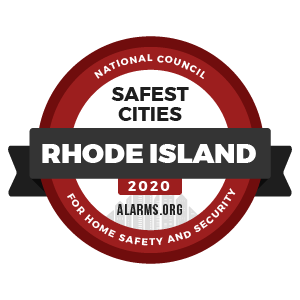 Glocester is the safest municipality in Rhode Island. The small town of just over 10K logged a mere 5 violent crimes and 30 property crimes in 2018, resulting in crime rates that were less than 14% of national levels in each respective category.

#3 Bristol is the first municipality on the list to record a number of violent crimes in the double digits in 2018 (it had 10). However, due to its larger size, Bristol’s violent crime rate was actually lower than those of the communities in the #1 and #2 spots. Bristol’s slightly higher property crime rate keeps it out of the top spot, yet is still less than 20% of the national rate.

Rhode Island’s 2nd oldest municipality, Portsmouth, continues the state’s safety streak, earning the #4 spot on the list. Portsmouth’s 0.4 per 1,000 violent crime rate is actually lower than all preceding entries, yet slides down the ranking by averaging 1.46 more property crime offenses than #1 Glocester.

Closing out the list of Rhode Island’s 5 safest cities is Narragansett, an oceanside community that doubles its population during the summer months. Narragansett achieved a remarkable violent crime rate of 0.52 per 1,000, although the town has a slightly higher rate of property crime relative to others on the list, perhaps owing to its status as a popular tourist destination.