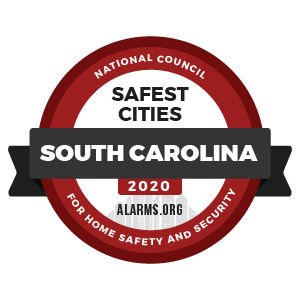 With per capita violent and property crime rates above national levels according to the latest FBI crime data, South Carolina cannot claim to be one of the safest cities in the country. Nevertheless, the Palmetto State is home to plenty of safe communities boasting low crime levels and well-staffed police forces.

Aiken tops the list of South Carolina’s safest cities. Despite a higher-than-national average violent crime rate, the city, which was named “The Best Small Town of the South” by Southern Living, makes up for it with a very low property crime rate of 8.26 per 1,000 and a high ratio of law enforcement to residents of 3.82 per 1,000.

The second safest city in South Carolina is Blufftown, a fast-growing Lowcountry community of 22.5K in Beaufort County. Blufftown excels in many areas, and safety is one of them: the city’s 2.21 per 1,000 violent crime rate is just 45% of the statewide rate.

Mount Pleasant is 3rd in the ranking of South Carolina’s safest cities. The large Charleston County community earned some of the lowest crime rates in the state, despite a large population of nearly 90,000.

4th in the ranking is Fort Mill, a suburb of Charlotte with the perfect balance of low crime rates and a law enforcement-to-residents ratio above 3 per 1,000. Fort Mill is followed by Port Royal (#5), a city on Port Royal Island that boasts the lowest violent crime rate of any city in South Carolina’s top 5.