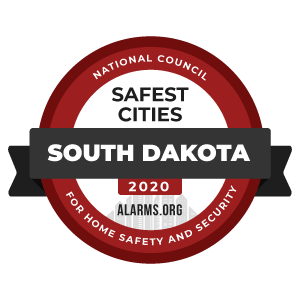 Brandon is the safest city in South Dakota, as well as the wealthiest. Though Brandon’s population is just over 10K, the city is the largest suburb of Sioux Falls, South Dakota’s largest city. With a violent crime rate of 1.09 per 1,000, and a property crime rate less-than-half of those of every other municipality in the state, Brandon easily earns its title.

The second safest city in South Dakota is Brookings, the state’s 4th largest with a population of over 24,000. Home to South Dakota State University, Brookings is a family friendly community, boasting a violent crime rate of under 2 per 1,000 and a property crime rate of about half of nationwide levels.

#3 Watertown is similar in size to Brookings, and is one of the most wealthy communities in the state. Compared to the first two cities in the ranking, Watertown’s crime rates aren’t quite as impressive, though its 3 violent offenses per 1,000 is still below state and national levels.

Huron is 4th on the list. The county seat of Beadle County is home to the annual South Dakota State Fair and “The World’s Largest Pheasant” statue. Though Huron’s violent crime rate is above the state average, the city balances it with a low rate of property crime and a solid law enforcement-to-residents ratio of 2.05 per 1,000.