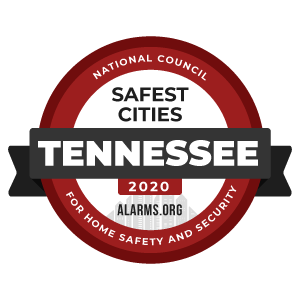 Higher than average crime rates in the large cities of Memphis and Nashville keep Tennessee out of the discussion of the country’s safest states, yet the Volunteer State is home to many municipalities with comfortingly low crime rates that are considerably below state and nationwide levels.

Brentwood is Tennessee’s safest city. The affluent Nashville suburb is home to many country music stars and professional athletes, and boasts low crime rates that stand in contrast to the larger nearby city, including a violent crime rate of 0.8 per 1,000 and a property crime rate of 9.26 per 1,000.

#2 Germantown is a suburb of Memphis which received the 2019 Malcolm Baldrige National Quality Award for its performance excellence. The city’s violent crime rate is on par with #1 Brentwood’s, yet Germantown logged a slightly higher property crime rate of 15.44 per 1,000.

Franklin, Tennessee’s 4th safest city, is by far the largest in the state’s top 5, with a population topping 80,000 that is nearly double that of the next largest entry. Known for its many historic buildings and neighborhoods dating back to the 19th century, Franklin boasts crime rates well below the averages for a city of its size.

Rounding out the list of Tennessee’s five safest cities is Gallatin, a city of 38.4K that is home to several national company headquarters. While it’s violent crime rate of 3.15 per 1,000 is not terribly impressive, the city is boosted in the ranking by its well-staffed police force.