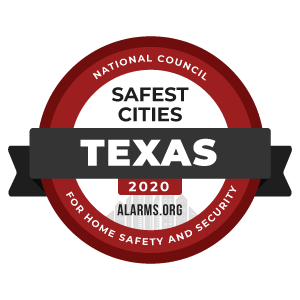 Though Texas is not among the safest U.S. states in terms of crime levels, the Lone Star State is so large and varied that its safest communities boast crime rates that comfortably place them among the most secure in the country. In fact, Texas’ five safest cities all have crime rates below 0.5 per 1,000, or 7 times under nationwide levels.

22 miles northeast of Austin lies Hutto, the safest city in Texas. The Williamson County city of just under 27K recorded less than 100 total crimes in 2018, a remarkable feat for a municipality its size.

Texas’ 2nd safest city is Fulshear, a city that’s population went from just 700 in 2008 to an estimated 13,790 in 2020, thanks to its proximity to Houston. Despite its rapid expansion, the city has remained very safe, logging just 2 violent crimes in 2018.

The colorfully named Trophy Club is Texas’ 3rd safest city. Similar in size to #2 Fulshear, Trophy Club also recorded 2 violent crimes in 2018, though with 8 (68, total) more property crimes in the same year, it’s just a notch lower in the ranking.

#4 Colleyville is an affluent suburb of Dallas renowned for its excellent public school system. The city’s safety record deserves recognition, as well, as Colleyville managed a low 0.29 per 1,000 violent crime rate in 2018.

Murphy (#5), another wealthy Dallas suburb, fills out the list of Texas’ five safest cities. Development has boomed in Murphy since the 1999 opening of the President George Bush Turnpike, yet the city has remained a safe place to live, earning a 5.83 total crime rate in 2018.