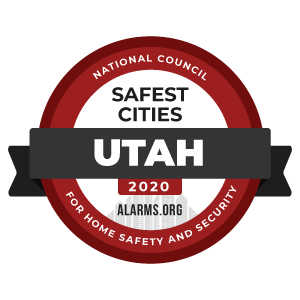 While you’d expect Utah, a state largely populated by teetotaling, law-abiding members of the Church of Latter Day Saints, to be among the safest states, the Beehive State doesn’t quite meet expectations. That’s not to say Utah is dangerous: it’s violent crime rate of 2.33 per 1,000 is well below national levels, however, its rate of property crime is about average compared to the rest of the country.

Nevertheless, Utah’s safest cities boast stunningly low crime rates, on par with the safest municipalities in the United States, validating the preconceived notions many have about the state. Unlike many states, police departments in Utah often serve two or more cities, resulting in a merging of statistical data for two cities. Let’s take a closer look at Utah’s safest communities.

Utah’s safest statistical area is the  merged communities of Highland and Alpine, which are serviced by the Lone Peak Police Department. The statistical area has a combined population of nearly 30,000, yet recorded a mere 7 violent crimes in 2018, resulting in a violent crime rate of 0.23 per 1,000.

The 2nd safest city in Utah is Mapleton, a modestly sized community of just over 10K in the Provo-Orem Metropolitan Statistical Area. Mapleton logged exactly 1 violent crime in 2018, amounting to a near nonexistent violent crime rate of 0.1 per 1,000K.

The combined statistical area of Santa Clara and Ivins, located in Washington county, is Utah’s #3 safest police jurisdiction. Together, the cities have a violent crime rate around 7 times lower than nationwide levels.

#4 Santaquin/Genola are two peaceful and picturesque cities in the Provo-Orem metropolitan area. Added up, they have a population of about 13.5K and recorded just 4 violent crimes between them in 2018.

#5 Saratoga Springs is one of the fastest growing cities in the state, with families drawn to its pristine location at the foothills of the Lake Mountains, and the city’s low crime rates.