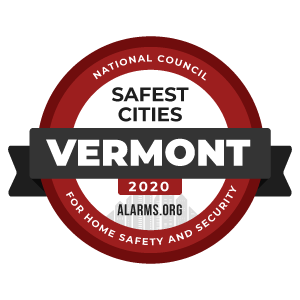 Vermont witnessed another drop in violent crime between 2017 and 2018, according to the latest FBI crime data.  With violent crime levels at less-than-half of the national rate, Vermont is justifiably considered one of the safest states in the country. Here’s a closer look at the Green Mountain State’s safest cities.

Vermont’s safest city is Milton, a suburb of 11,024 in Chittenden County with a history dating back to before the Revolutionary War.  While Milton’s violent crime rate of 1.45 per 1,000 is just a bit below the statewide level, the city’s very low property crime rate of 9.43 per 1,000 earned it the top spot.

Coming in at #2 is Colchester, another Chittenden County community and suburb of Burlington.  With a violent crime rate below 1 per 1,000 and the Vermont National Guard stationed in the town, Colchester residents can be rest assured of their safety.

The 3rd safest municipality in Vermont is Essex, the state’s largest town and home to its busiest Amtrak station and largest private employer, GlobalFoundries. Essex lays claim to the lowest violent crime in Vermont, with 0.60 per 1,000, but falls short of the #1 spot due to an above state average property crime rate.

There’s a significant elevation in crime levels between the 3rd and 4th entries on the list, as #4 Burlington, Vermont’s largest city, has violent and property crime rates above statewide levels. However, the city benefits from a large police force, resulting in a ratio of 3.20 law enforcement personnel per 1,000.

#5 Rutland continues the dropoff, earning a violent crime rate slightly above the national average, yet also has a large police force that mitigates the city’s less-than-impressive crime figures.