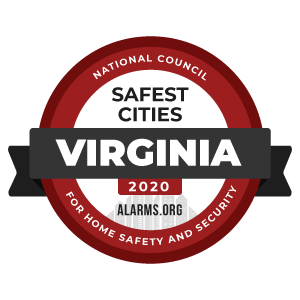 Coming in #2 is Hampton, a large city of nearly 134K that boasts very low crime rates for a city its size. While its 2.36 per 1K rate of violent crime isn’t among the lowest in the state, Hampton makes up for it with its high 2.77 per 1,000 ratio of law enforcement personnel to residents.

The third safest city in Virginia is Manassas Park, a small city in Prince William County to the south of Bull Run, a river immortalized in the name of two famous Civil War battles. Many more were harmed during those battles than is usual in Manassas Park, which posted a violent crime rate of 1.48 per 1,000 in 2018,or less than half of the nationwide average.

#4 Vienna was also the site of an early Civil War skirmish, yet is considerably more peaceful in present times, with the lowest violent crime rate of any Virginia city, at 0.48 per 1K. The city’s property crime levels–while low by national standards–are just high enough to keep Vienna out of the spot of Virginia’s safest city.

Closing out the list of Virginia’s five safest cities is Blacksburg, a prosperous community that is home to Virginia Tech, a renowned public, land-grant, research university. Blacksburg is one-third of one of the fastest growing metropolitan statistical areas in the country (the Blacksburg-Christianburg-Radford MSA), with low crime being one of the main draws for the many moving into the area.