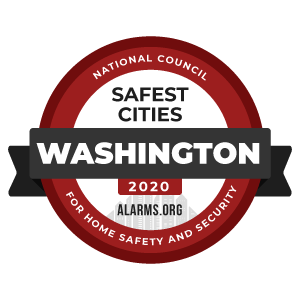 Washington’s crime situation is a bit unusual: the state boasts a violent crime rate considerably below the national average, yet has a significant property crime issue, mainly in Seattle and its other large cities. Nevertheless, Washington is home to a handful of cities where neither violent nor property crime are a significant issue. Here’s a closer look at the Evergreen State’s five safest cities.

The safest city in Washington is Oak Harbor, a city of around 23K and the largest on Whidbey Island. Oak Harbor is a very safe community that posted a violent crime rate of just above 1 per 1K and a property crime rate below 7 per 1K in 2018.

#2 on the list is West Richland, a city of 15K in Benton County in the south central part of the state that recorded just 11 violent crimes in 2018.  West Richland is notable as the site of Manhattan Project activity in the 1940’s, when the city was run by the Federal War Department.

Washington’s #3 safest city is Camas, a city of around 24K near the state’s southern border that is part of the Portland, Oregon metropolitan area. Cama boasts a low violent crime rate of 0.8 per 1K, and its property crime rate is similarly impressive.

Snoqualmie, a city of about 14,000 28 miles east of Seattle, is 4th in the ranking. Made famous as the location of many exterior shots for David Lynch’s cult classic TV series Twin Peaks, Snoqualmie logged just 3 violent crimes in 2018, good enough for the lowest rate in Washington. The city is kept out of the top spot by its 12.12 per 1K property crime rate, which is double #1 Oak Harbor’s rate.

Coming in at #5 is Bainbridge Island, the 2nd largest city in Kitsap County. Bainbridge Island has been awarded an eCity Award for its strong online business community by Google, and its low rate of crime is another remarkable characteristic of the city.