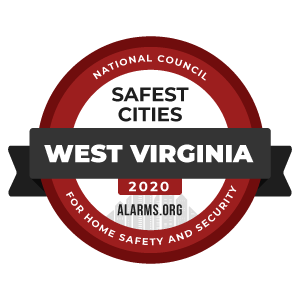 While West Virginia lags behind much of the U.S. economically, the state boasts impressive violent and property crime rates below the national average in both categories. Much of the credit for this can be attributed to the state’s five safest cities.

West Virginia’s safest city is Weirton, a city of 18.5K straddling the counties of Brooke and Hancock in the Northern Panhandle region of the state. Weirton recorded just 9 violent crimes in 2018, which adds up to a violent crime rate of 0.49 per 1K that is significantly below the U.S. average, as well as those of all other West Virginia communities.

Ranking #2 is Fairmont, a city of 18.5K beautifully positioned along the Monongahela River in Marion County. Though the city’s crime figures do not compare with those of Weirton’s, Fairmont’s violent and property crime rates are nevertheless below the national averages.

The 3rd safest city in West Virginia is Morgantown, which is also located alongside the Monongahela River near #2 Fairmont. Home to West Virginia University, Morgantown has one of the best reputations of any city in the state for its academics, art & culture scene, and athletics, in addition to a respectively low crime rate.

Coming in at #4 is St. Albans, a small city of around 10,000 located at the confluence of the Kanawha and Coal rivers. St. Albans boasts the second lowest violent crime rate of any city in West Virginia, with 1.87 per 1K.

#5 Martinsburg, the county seat of Berkeley County, is marred by a higher-than-average property crime rate, yet its violent crime rate is comfortably below the national average.