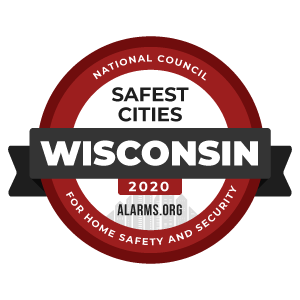 Although violent crime went up in Wisconsin’s largest cities during 2018, the state remains one of the safest in the Midwest: Wisconsin’s 2018 violent crime rate of 2.95 per 1K was considerably below the national average. Let’s take a closer look at Wisconsin’s five safest cities.

Cedarburg, a modestly sized community of 11.5K, is Wisconsin’s safest city.  The city, located around 20 miles north of Milwaukee, logged a mere 3 violent crimes in 2018, which adds up to a violent crime rate of 0.26 per 1K.

Next on the list is the Fox Valley Metropolitan area, which comprises a number of small communities based along the Fox River. With a violent crime rate of 0.73 per 1K, and a property crime rate of 3.73 per 1K, Fox Valley metro residents can be well assured of their safety.

Muskego isn’t far behind. The city of about 25K in Waukesha County was originally inhabited by the Potawatomi Indian tribe, and today boasts one of the lowest violent crime rates in the state.

Port Washington, located on Lake Michigan in Ozaukee County, is #4 on the list of Wisconsin’s safest cities. Port Washington’s violent crime rate of 1.61 per 1K, while impressive, is a bit higher than the other entries in the state’s top 5, however the city earns its spot through a low property crime rate, and a high rate of law enforcement personnel to residents.

Completing the list of Wisconsin’s top five safest cities is Caledonia, a village of 25K located in Racine County, near the state’s border with Illinois.  Caledonia recorded just 172 total crimes in 2018, or about one crime every two days.