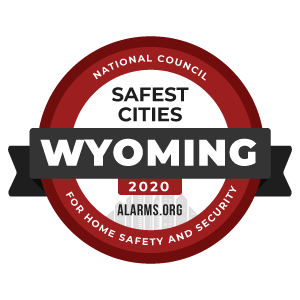 As one of the least densely populated U.S. states, Wyoming is as peaceful and untouched a state as you’ll find in the country, with vast high plains in the east running into the many stunning mountain ranges in the western part of the state.

Additionally, Wyoming is one of the safest states in the U.S., and it’s already low violent crime rate dropped an additional 17% between 2016 and 2018.  Let’s take a look at the Cowboy State’s five safest cities.

#2 Laramie actually has a lower violent crime rate than #1 Green River, yet is brought down a notch by its slightly higher property crime rate of 12.15 per 1K.  The Albany County county seat had its beginnings as a chaotic frontier town in the Old West era, but is now an in-demand retirement community due to its safety, affordability, and beautiful scenery.

Placing #3 on the list is Rock Springs, a city of 23.4K (large by Wyoming standards) in Sweetwater County near #1 Green River. The city is known as the “Home of 56 Nationalities” as its booming coal mines attracted immigrants from around the world in the early part of its settlement. Today, residents of Rock Springs enjoy a total crime rate of 15.25 per 1K.

Rounding out the list of Wyoming’s top five cities are Sheridan (#4), a city of nearly 18K positioned halfway between Yellowstone Park and Mount Rushmore with a violent crime rate below 1 per 1K, and Evanston (#5), a small city of about 12K near the Utah border that recorded a mere 11 violent crimes in 2018.