Sexually transmitted disease infection rates continue to rise in the United States, with combined cases of chlamydia, gonorrhea, and syphilis hitting a new all-time high in 2018.

In order to find out which states had the highest STD rates, we pulled the latest data from all 50 states on reported cases of the three most commonly reported sexually transmitted diseases, chlamydia, gonorrhea, and syphilis, from the the Centers for Disease Control and Prevention’s 2018 STD Surveillance Report. Then, we used this data and other variables to rank all 50 states based on overall STD infection rates.

A quick note on prevention: ​There’s no equivalent of a security system  to help you identify carriers before having intercourse. Always make sure to use appropriate protection and choose your partners wisely.

Chlamydia isn’t the most dangerous sexually transmitted disease, but it is the most common in the U.S. The bacterial infection is often spread unknowingly due to the fact that most infected people show no symptoms. However, Chlamydia can do serious, lasting damage to a woman’s reproductive system, in addition to potentially causing fatal complications to a fetus during pregnancy.

States with the highest rates of infection (per 100,000 population):

States with the lowest rates of infection:

The list of the top five states with the highest rate of reported cases of Chlamydia is nearly identical to the previous year’s, with New Mexico and South Carolina swapping places. Each of the five states saw an increase in reported cases over 2017.

The two lists demonstrate the wide variance in reported chlamydia cases between states at the top and the bottom of the ranking, as Alaska’s infection rate per 100K is over four times higher than West Virginia’s. 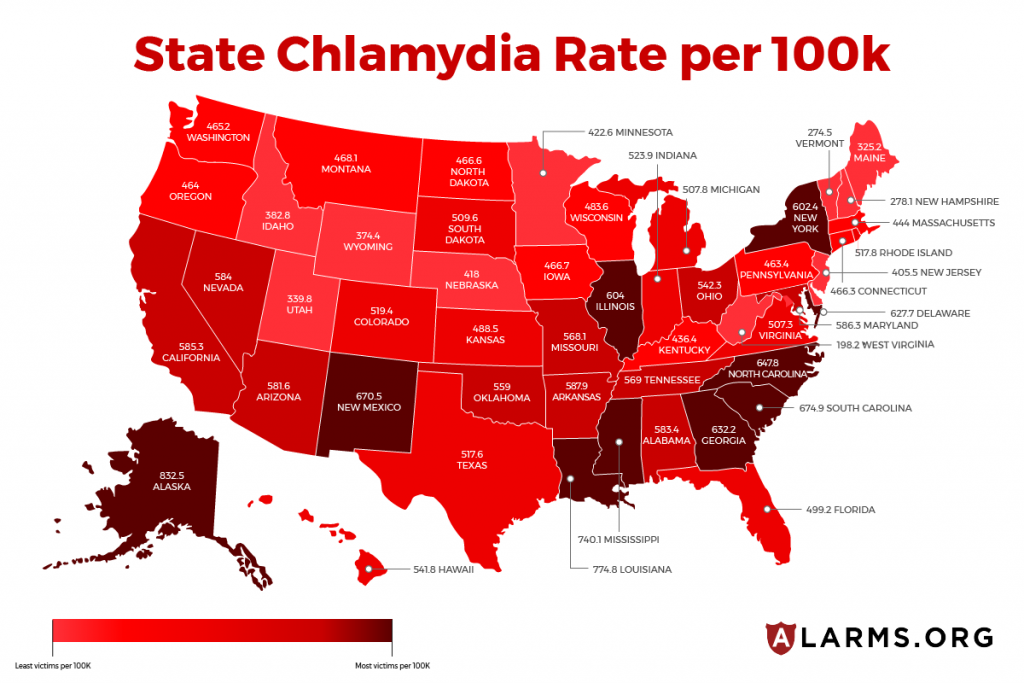 Like Chlamydia, Gonorrhea is an infection caused by bacteria that can infect both men and women. If Gonorrhea is not treated, it can cause serious complications for people of both sexes, including long-term pelvic and abdominal pain, and infertility.

The disease is particularly concerning for disease specialists due to the emergence of antibiotic resistant strains of Gonorrhea, and the fact that people can get re-infected with the disease even after completing treatment.

States with the lowest rate of infection:

As with the states with the five highest Chlamydia rates, the five states with the highest rate of gonorrhea cases are the same as the previous year, albeit with minor reshuffling in the ranking: South Carolina and Alabama rose a spot, and Louisiana dropped two spots. However, the rate of reported cases rose in all five states. 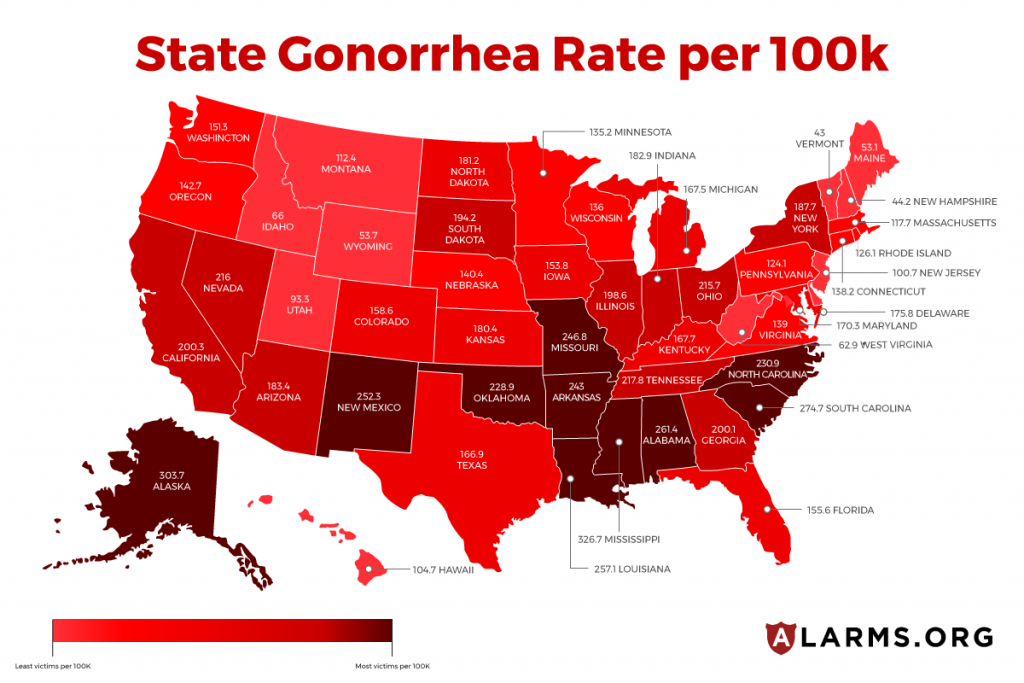 Of the three most commonly reported sexually transmitted diseases, Syphilis is by far the least common. However, left untreated, syphilis is the most harmful of the three, causing serious brain, heart, lung, and nervous system damage, and possibly leading to death.

Syphilis is categorized into four stages: primary, secondary, latent, and tertiary. In 2018, over 115,00 syphilis cases were reported in the United States, which includes 35,000 cases of primary and secondary syphilis, the two most infectious stages of the disease. This is the highest reported number in nearly 30 years.

States with the highest rate of infection of primary and secondary syphilis (per 100,000 people):

States with the lowest rate of primary and secondary syphilis infection:

Compared with last year’s ranking, Louisiana dropped out of the top five, while Mississippi jumped six places from #9 to #3, stemming from a significant 5.1 per 100K increase in the rate of reported infections. The other four states in the top five witnessed an increase in infection rates, as well, yet none as significant as that of Mississippi. 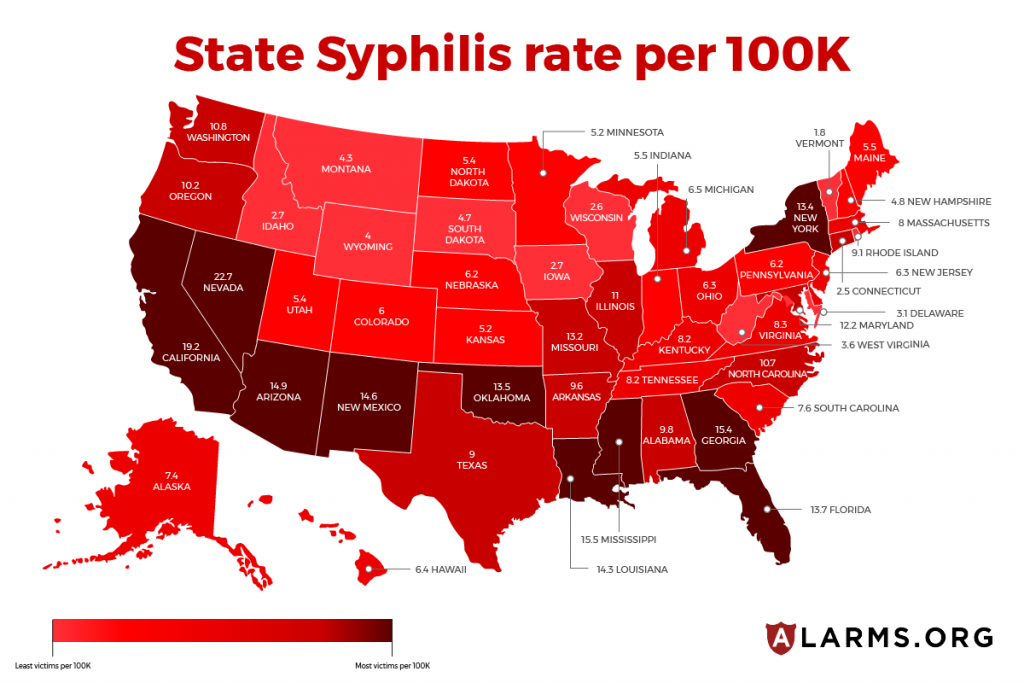 Using population figures, the most recent gonorrhea, chlamydia, and syphilis rates per 100K population, and Census.gov data on high school graduates percentage and percentage of household that have married couples, we gave all 50 states a score based on the prevalence of STDs and STD risk factors.

A higher STD index score indicates a higher likelihood of contracting an STD in a particular state. 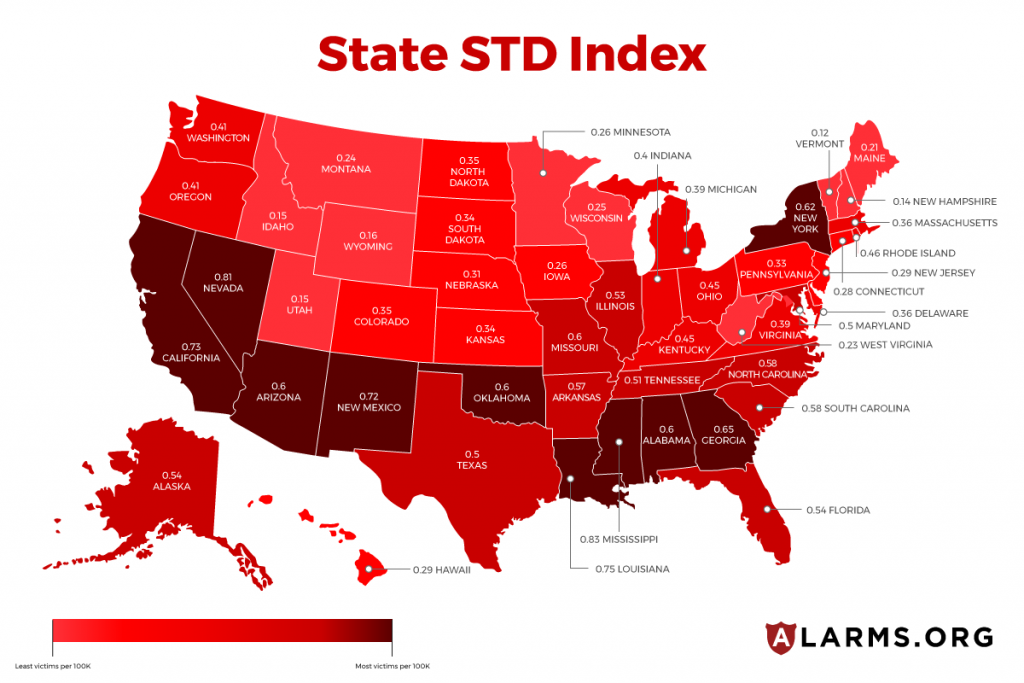 Despite the alarming national statistics, a number of states have very low rates of reported infection, indicating that the problem of STDs is not universal across all 50 states. However, as infection rates in the most impacted states continue to increase, the Centers for Disease Control and Prevention faces a significant challenge ahead in increasing awareness of the problem of sexually transmitted diseases, and working to lower disease transmission rates across the nation.

Data on reported cases of chlamydia, gonorrhea, and primary and secondary syphilis by state was taken from the CDC’s 2018 STD Surveillance Report, while high school graduates percentage and the percentage of households with married couples was pulled from Census.gov.

We computed normalized values of these variables resulting in values between 0 and 1 for each variable. Then, we averaged the normalized values together in order to rank the states from highest to lowest in terms of the prevalence of STD cases and associated risk factors.