Top 100 Most Dangerous Cities in America

Gun violence and the prevalence of violent crime in the United States remain hot button issues in American society.

Undoubtedly, the US has remarkably high rates of violent crime compared to other developed nations in Europe and Asia, especially in certain regions, but what is the underlying cause behind these numbers? Could it be the nation’s lax gun laws and the ease of acquiring a firearm, or is there another explanation?

Is this about gun control or the lack thereof?

The strictness of gun laws seems to play a role in violent crime rates, as the states with well over their share of cities in the top 100 (Table 1), like Florida, Michigan, Georgia, and Alabama, all have rather lax gun laws. However, there are exceptions: New Jersey, home to five cities in the top 100, and Illinois, home to three (including #98 Chicago) have very strict gun laws.

​Although mass shootings are becoming increasingly common in American life, the violent crime and prevalence of gun murders plaguing America’s most dangerous cities aren’t best explained by lax gun laws, rates of gun ownership, or one-off rampages (although, these do have an effect), but rather, by income inequality.

Where there is a high poverty rate, and little opportunity to earn a decent wage, we find high homicide rates and a prevalence of other types of violent crime.

The American communities suffering the hardest at the hands of violent crime are also some of the most impoverished in the country, with some of the highest unemployment rates, to boot.

Is this the most dangerous city in America?

Let’s look at the two communities that top the list: Anniston, AL (#1) and Bessemer, AL (#2) (see table 1 below). Both are small cities in Alabama that boasted bustling economies in decades past but have since fallen on hard times following the phenomenon of deindustrialization in the late 20th century.

​Bessemer was once a hub of manufacturing and ore mining activity and home to a large Pullman Standard railroad car manufacturing factory, but as these industries dried up and/or moved elsewhere, unemployment rose, and with it, violent crime.

Now, Anniston and Bessemer are plagued by unemployment rates significantly higher than the national average, while the service industry jobs that have replaced manufacturing jobs in these communities often don’t come close to providing a decent living wage. The same phenomenon is seen all across the top 100: economic disenfranchisement leading to higher instances of violent crime. 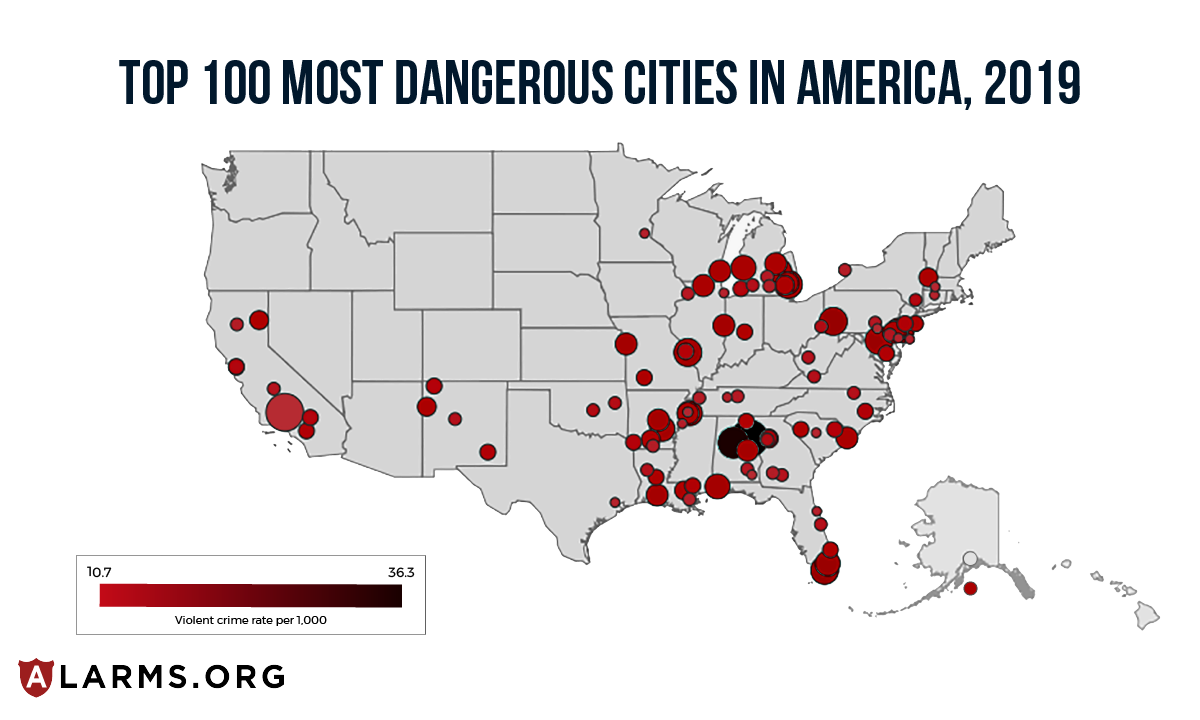 Top 100 Most Dangerous Cities in America

Is this the other most dangerous city in America?

Next, we wanted to look at the most dangerous large cities in the United States, so we excluded all communities with a population less than 100,000. Rather than just consider the violent crime rates of these cities, we also factored in a “police adequacy” score, which is the total number of crimes divided by the number of police officers servicing the city.

Employing these calculations yields some surprising results, with few of the usual suspects like Detroit, Chicago, or Baltimore appearing on the list. Instead, mid-sized cities in the Pacific Northwest and California dominate the ranking.

Four Washington cities appear in the top ten, as well as Billings, Montana (#3) and Portland, Oregon (#9), also in the region. These results tell a different story than what you usually encounter when hearing about the crime problem in America, but the issue is complex and multi-faceted.

California cities, located all over the state, account for a whopping 28 positions on the list. This may indicate that the overburdened police forces in these cities encounter a higher amount of crime than they are capable of policing. 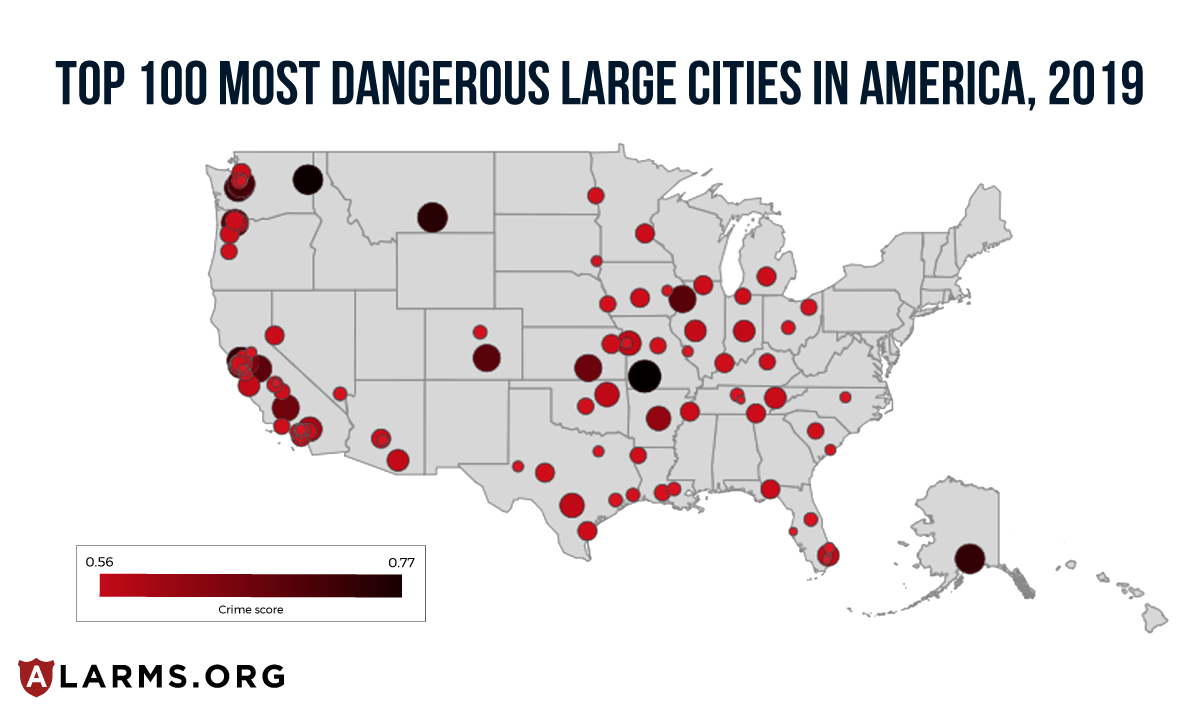 Many of the communities in Table 1 are relatively small, with most having populations hovering in between 10K and 30K. In smaller cities, it only takes a few violent crimes to lend a significant boost to the crime rate.

However, many of these communities are adjacent to larger metropolitan areas, such as #4 McKeesport, PA (population: 19,731), which is part of the Pittsburgh metropolitan area, and Florida City, FL falling just outside of the Miami border.

Many of these smaller communities have violent crime rates similar to the most dangerous neighborhoods of the larger cities they are adjacent to, and in many cases, they border these neighborhoods. The difference is that the larger cities also have more affluent, low crime areas that lower their overall violent crime rates, while their smaller satellite cities do not.​

Looking at the cities with the highest increase in violent crime (Table 3), we do not find booming megalopolises, but rather smaller communities just breaking the population threshold.

In essence, it is the smaller cities that actually may have the greatest ongoing risk of violent crime. Baton Rouge, LA (#16), Louisiana’s capital city, is the outlier here, with a population of 227,715. 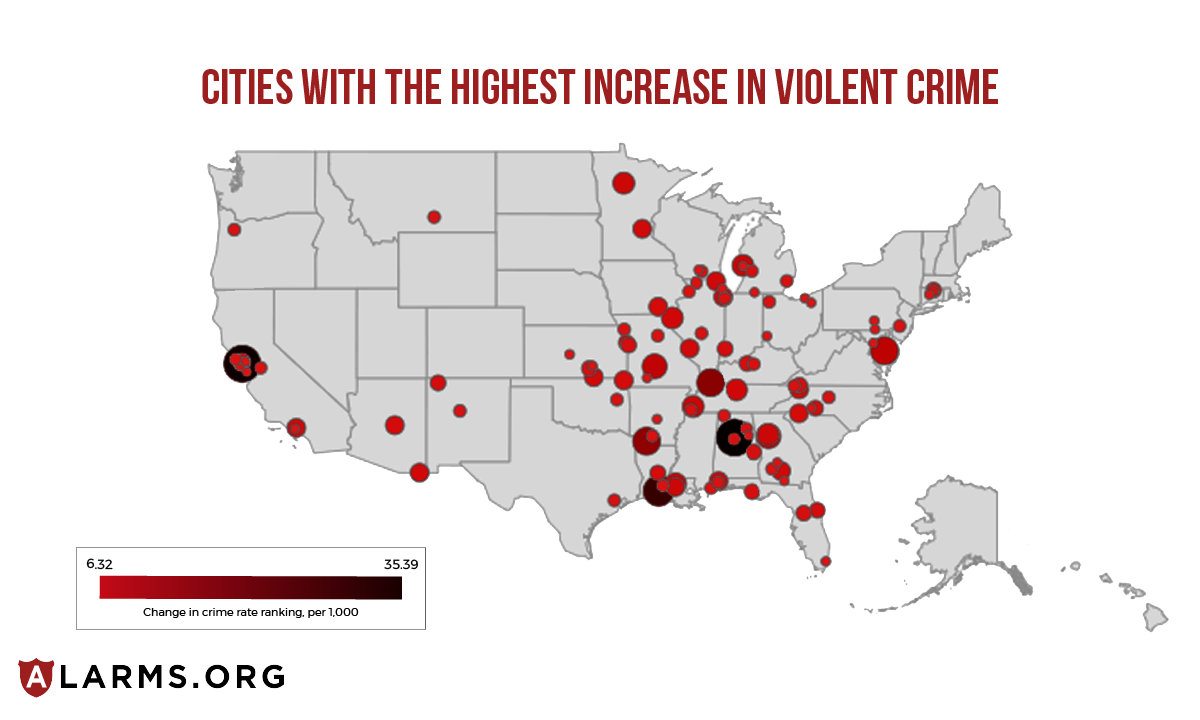 Cities with the highest increase in violent crime

Is violent crime decreasing in America?

Despite the high violent crime rates plaguing these cities, there is evidence that, overall, the violence is lessening, and will continue to do so.

Nationwide, the violent crime rate fell 0.9%, overall, despite rises in the cities found in Table 4. Most American communities experienced a net decrease in murder rate and violent crime.

While the trend of declining violent crime across the board offers up some hope for American cities besieged by violence and murder, many of them have deep-seated issues that have plagued their neighborhoods for decades, and it is not entirely clear where the solution lies.

In addition, even if ranked among the “worst” trends for larger cities, many of these cities still have negative crime trending (reduced violent crime over time). The “surprise” is that cities of such size make up a minority of the 100 cities with high violent crime rates. This may be an artifact of our information system. More attention is paid to the events of a large city from outside that city. Small cities’ events tend to not be propagated as far in the media. 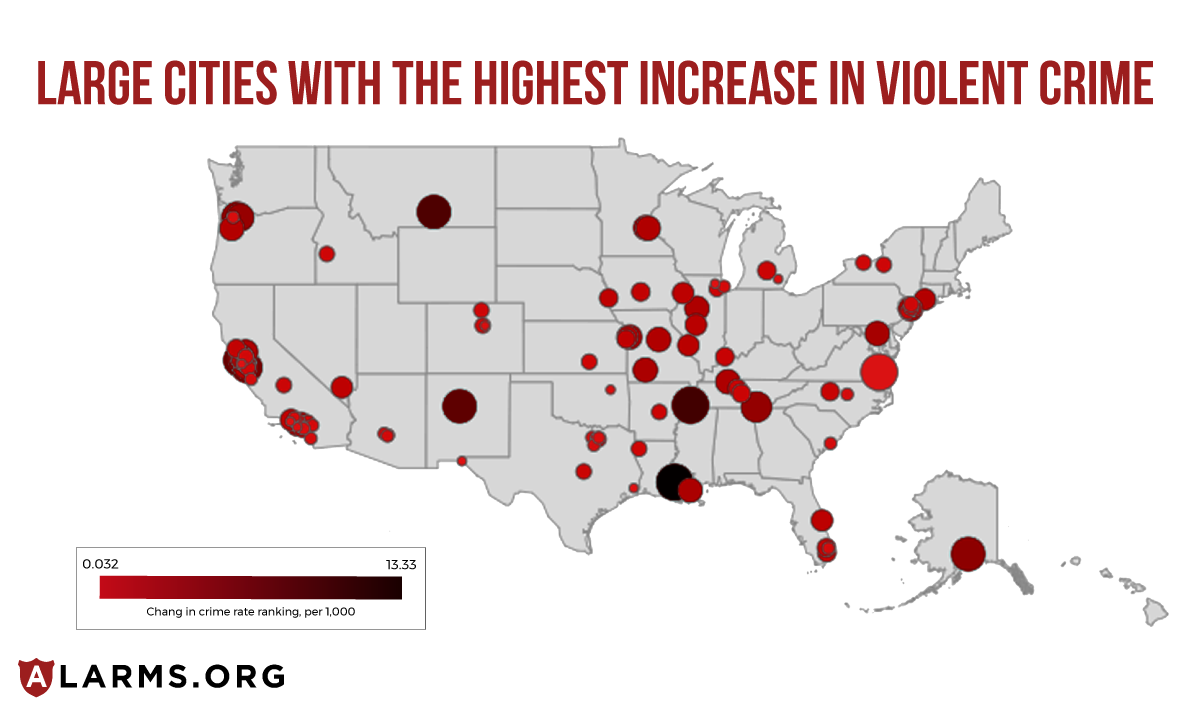 Large cities with the highest increase in violent crime

Another way to rank America’s most dangerous cities?

However, there are some surprises, as well, including Baton Rouge, Louisiana (#10), Anchorage, Alaska (#4) and Minneapolis, Minnesota (#8). These cities aren’t the first to be mentioned when discussing American cities with severe crime issues, but are brought up in the ranking by their significant increases in violent crime in the past year, and may get more national attention in coming years. 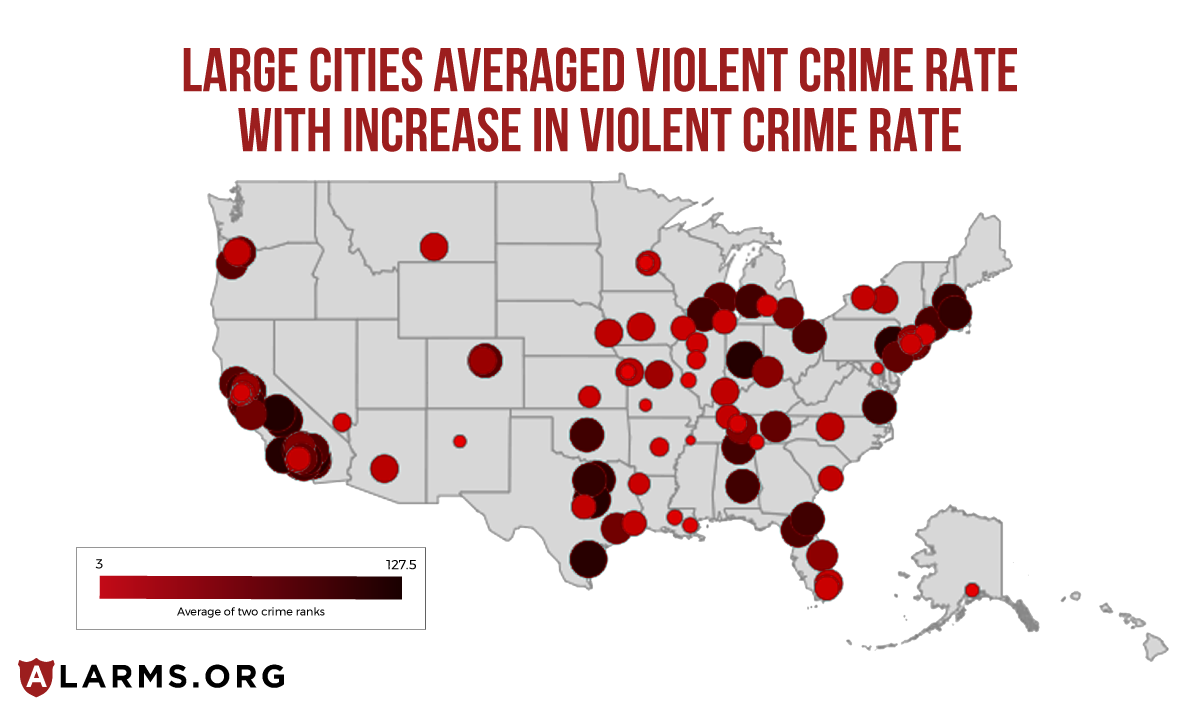 Law enforcement agencies from cities, metropolitan areas, counties, universities, state, tribal and other agencies across the country submit crime data to the FBI using their Uniform Crime Reporting system. The data is made available for the public to view, download and analyze.

We used FBI’s Uniform Crime Reporting tool to collect data for the year 2017. Overall, data from 8,793 law enforcement agencies that represented more 193 million of the US population helped us draw interesting insights between the size of the police force and the incidence of crime. See Table 1 for a summary of coverage.

There are two broad classifications of crimes: violent crimes and non-violent crimes. According to the FBI website, “Violent crime is composed of four offenses: murder and nonnegligent manslaughter, rape, robbery, and aggravated assault. Violent crimes are defined in the UCR Program as those offenses that involve force or threat of force. Property crime includes the offenses of burglary, larceny-theft, motor vehicle theft, and arson. The object of the theft-type offenses is the taking of money or property, but there is no force or threat of force against the victims. ”

We computed a new variable called Police Adequacy = TotalCrimes / Number of police employees. We consider that smaller Police adequacy statistic is, safer the city is. We transformed and normalized Police adequacy also, resulting in a crime score between 0 and 1. Next, we combined the two scores to create a score for each city.

Staying safe in a dangerous city

If you’re stuck in one of the most dangerous cities, there are a few ways you can still keep yourself safer then most. Consider installing an alarm system in your home.  Some of the best systems include ones by ADT, FrontPoint and Vivint. If you don’t want a complex installation, there are a number of wireless systems as well . (See our review of simplisafe for a good no install system).  Alternatively you can put up a home security camera. Many of them work directly with your phone to alert you when there is movement. Finally, if you have elderly family who don’t have a caretaker, they should probably check out our best medical alert system page.