Unlike many uniformly safe countries in Western Europe and East Asia, how safe you are in the United States varies depending on where you are in the country. Crime rates fluctuate considerably from city to city, and even between neighborhoods within a city. That’s why it’s so crucial to know which communities are safe, and which are best avoided, especially if you have a family.

With this need in mind, we’ve put together a list of the 100 safest cities in the country. We determined the ranking by giving each American city with a population over 10,000 a safety score calculated using violent and property crime rates derived from the latest FBI crime statistics, in addition to law enforcement data from nearly every city in the US.

Here, we’ll take a more in-depth look at the 100 safest cities. Which regions and states of the country are they most concentrated in? Which areas lack safe cities? By answering these questions and more, we’ll provide insight into the crime situation in the United States.

If you and your family happen to live in one of the country’s safest cities, perhaps you’ll sleep a little easier tonight. As for those that are planning a move in the near future, this list is a great resource to use in choosing a safe city to live and work in.

What makes a city safe?

There are plenty of ways to judge the safety of a city: crime levels, the frequency of natural disasters, road conditions and accident data, and more. But for the purposes of this ranking, we’ve limited our criteria to violent and property crime rates, and the ratio of law enforcement-to-residents.

Our thinking is that the risk of being a victim of a crime is the most unavoidable danger when living in a city: if crime is a problem where you live, you will inevitably come across it in your daily life. Additionally, the density of police officers in a given city is relevant since it plays a role in how quickly local law enforcement is able to respond to a crime-in-progress.

Where are the safest cities in the United States located?

The 100 safest cities in the country are spread throughout 12 U.S. states. However, 76% of the cities are located in just 4 states, while the other 8 states are home to 1 to 5 of the safest cities.

New Jersey is home to the greatest share of America’s safest cities by a considerable margin. In all, 35 cities in the ranking are located in the Garden State, which is 16 more than in the next state. Massachusetts makes a strong showing, as well, coming in 2nd as the location of 19 of the safest states in the county. Next are New York and Pennsylvania, which tie for 3rd with 11 states each.

After the top 4 states, there’s a considerable drop off: Connecticut and Ohio tie for 5th place, as each have 5 states. 6th place goes to Rhode Island, which is the location of 4 of the safest cities. Next is Michigan in 7th place with two of the safest cities. Then, there’s 8 states with 1 city, a piece: Colorado, Illinois, Florida, Kansas, Maine, New Hampshire, Texas, and Wisconsin.

Breaking the safest cities down regionally, it’s clear to see which area of the country is the clear-cut winner: the Northeast. A whopping 87 of the 100 safest cities are located in this region (counting Pennsylvania).

The Midwest comes in distant 2nd with 10 of the safest cities. These two regions account for 97 of the cities, and 3 remaining cities are somewhat isolated, with no other cities on the list belonging to their respective regions.

The West is the biggest loser: no cities west of Colorado made the cut. 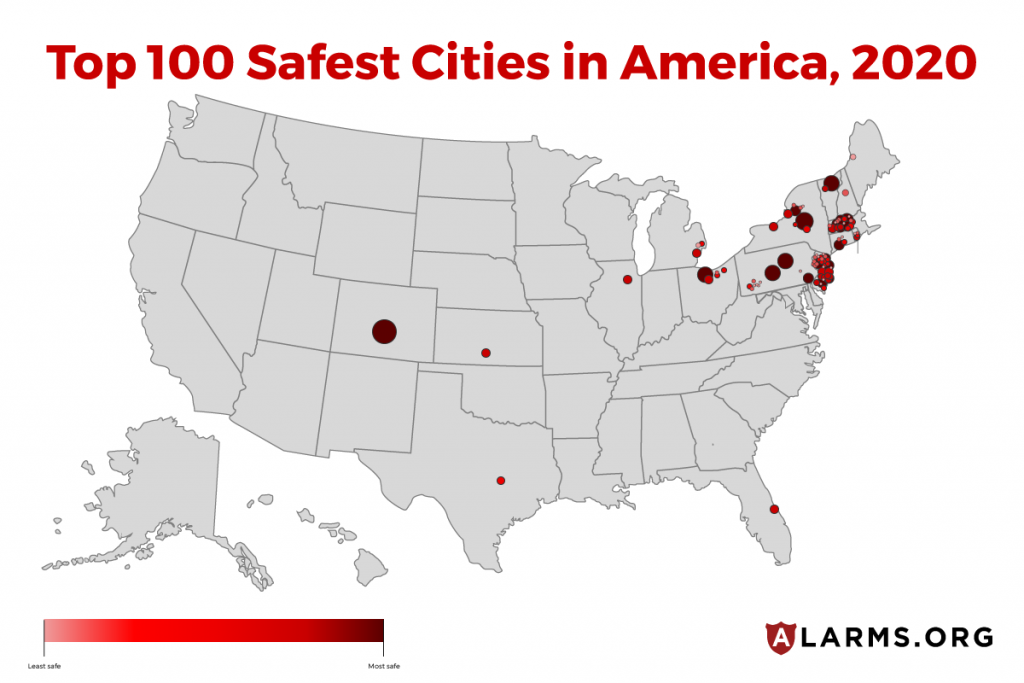 How large are the safest cities in the United States?

The average population of the United States’ 100 safest cities is 17,373, indicating that smaller cities tend to have lower crime rates and are safer, overall, than larger cities.

Let’s break the cities down by population:

As you can see, 74 cities have populations ranging from 10,000 to 19,999, accounting for a considerable majority of the list.  Few large cities make the cut: only 7 cities in the top 100 have a population of 30K or more, and Monroe Township, the largest city to make the list, has a population of just 45,597.

While the safest cities in the United States mostly have populations between 10,000 and 30,000, that doesn’t mean that larger cities are unsafe, necessarily. Small cities are mainly residential, while larger cities have more sizable commercial areas that offer greater opportunity for people to commit property crimes such as theft and vandalism. Higher levels of property crime are common in larger cities with populations topping 30K, even for those with very low violent crime, which is the reason they mostly don’t make the cut in this ranking.

What are the average crime rates for a top 100 city?

For an international perspective, the average top 100 city has a violent crime rate slightly lower than Japan’s 2018 violent crime rate of 0.46 per 1,000. Japan is a famously safe country, meaning that the U.S.’s top 100 safest cities are in very good company.

The 10 Safest Cities in the US

Culled from a list of over 2,800 U.S. cities, the municipalities in our top 100 have already distinguished themselves with their safety records. However, 10 cities posted crime rates low enough to separate themselves from the pack, making up the upper echelon of safe American cities. While New Jersey has the largest share of cities in the top 100, Massachusetts wins the top 10 as it is the location of half the cities on the list.

Bedford Town is an affluent community in Westchester County located about 45 miles northeast of New York City. The town was founded by Puritan settlers all the way back in 1680, and is the location of Stepping Stones, the historic home of Bill and Lois Wilson, co founders of Alcoholics Anonymous.

Though Bedford Town had slightly higher crime than #9 South Park Township in 2018, its law enforcement-to-residents ratio of 2.38 per 1,000 gives it the most well-staffed police force of any city in the top 10.

There are at least 14 Penn Townships in Pennsylvania, but only one earned the lowest property crime rate in the United States, and that’s Penn Township of Westmoreland County. The town of 19.3K logged just one property crime in 2018, resulting in a rate of 0.05 offenses per 1,000 people.

With a population near 20,000, Norton is the largest of the United States’ 10 safest cities. The host city of the Dell Technologies Championship PGA golf tournament had remarkably low crime in 2018, including a 0.70 per 1,000 rate of violent crime and a 1.15 per 1,000 rate of property crime.

Norfolk, a small town on the periphery of the Boston metro, is home to 4 state correctional centers. Thankfully, their presence hasn’t affected Norfolk’s crime situation in any way: the city earned the same 1.85 per 1,000 total crime rate as #6 Norton, but Norfolk gets the edge due to its better-staffed police force.

Clinton, a Worcester County town of 14,000, logged just 28 total crimes in 2018. While Clinton doesn’t have the lowest crime rates on the list, the town’s stellar safety record, coupled with its well-staffed police department, earns Clinton its position in the ranking.

While many of the uber-safe Massachusetts communities on this list are similar in character and appearance, Hopkinton is unique due to the fact that it is the starting point of the Boston Marathon, one of the most famous annual long distance races in the country. Hopkinton’s low 0.11 per 1,000 rate of violent crime is another thing the town can hang its hat on.

Due to its location in the Denver metropolitan area–thousands of miles from the rest of the Northeastern communities on this list–Frederick is a bit of an outlier. Nevertheless, Frederick earns the honor of being the 2nd safest municipality in America, as the town recorded just 7 total crimes in 2018.

Wayland is the safest place in the United States, and in a league of its own in terms of crime rates. The Middlesex County town logged just 2 total crimes in 2018, making it a virtually crime-free community. Wayland police must have a lot of extra time on their hands.

Looking at the list of the top 100 safest cities in the United States, it’s easy to draw parallels between the entries. Most of them are small, with a population between 10K and 20K, located in the Northeast, have higher-than-average median family incomes, and earned crime rates closer to those of Japanese cities than American ones.

However, there are outliers that prove that a safe city doesn’t need to fit a particular image or belong to a certain part of the country. These are the cities that offer hope to communities all around the country that they may reduce their crime levels.,

To identify the safest cities, we reviewed the most recent FBI Uniform Crime Report statistics. We eliminated any cities that failed to submit a complete crime report to the FBI and removed cities with populations under 10,000 thus leaving 3,381 cities (out of a total of 9,251).

We computed the total number of crimes reported by each city by adding violent crimes and property crimes. We then rated them using the population of the city and created a crime rate as the number of crimes per 1,000 population.

Data from 2,831 law enforcement agencies was collected to determine police adequacy (TotalCrimes / Number of police employees).  We consider that the smaller the police adequacy statistic is, the safer the city is.

Finally, we combined the two scores to create a safety score for each city. 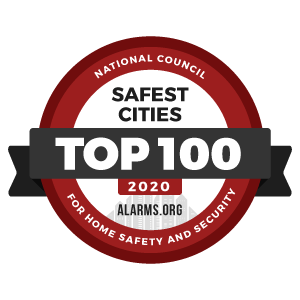